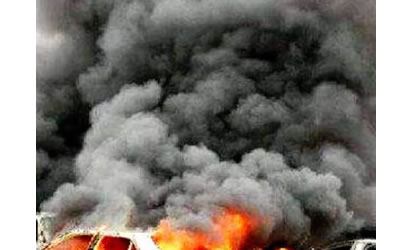 SIX people have died as a result of two early morning explosions improvised explosive devices IEDS on Mamanti and Molai around Damboa road axis in the outskirts of Maiduguri.

Sources said that about 0510hrs in the morning, three female suicide bombers with IEDS strapped to their bodies, attempted to infiltrate Mamanti village in the outskirts of Maiduguri.

They were promptly intercepted by Civilian JTF who alerted the military to stop them from murdering people.

While trying to achieve her target in the process, one of the suicide bombers detonated the IED strapped to her body killing her alone.

The other two tried to escape with the IEDS but were shot dead by security personnel on duty.

Also, at about 0730hrs, another suicide bomb incident was foiled at Mainari kanuri village along Damboa/Biu road in the outskirt of Maiduguri town where travellers were lined up waiting to be ferried across to Biu.7

Informed sources said that a boko haram suspected disguised as a cart pusher was intercepted by residents of the community while he tried to penetrate the Damboa bound convoy.

He detonated IED on his cart, killing himself and three nearby civilians, while two other civilians sustained injuries.

Both scenes have since been rendered safe and normally restored.