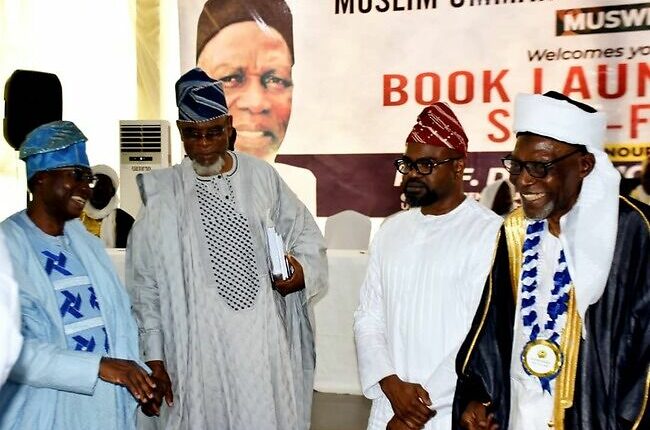 PIONEER Executive Secretary of the Muslim Ummah of South West Nigeria (MUSWEN), Professor Dawud Noibi, has urged Muslims in Nigeria, particularly the South West, to shun ethnic sentiments and prioritise the promotion of Islamic brotherhood and the strengthening of the unity of the country.

Professor Noibi, now the chairman of MUSWEN Elders’ Council, gave the counsel on Saturday at a send-forth and book presentation get-together organised in his honour by MUSWEN and held at the conference and events centre of the Muslim community of the University of Ibadan.

At the event which was attended by the Oyo State deputy governor, Chief Bayo Lawal and other eminent Muslim personalities, as well as representatives of Muslim organisations, the erudite scholar recalled his years of commitment to promoting Muslim unity throughout the country.

He then condemned the agitation for the carving out of a nation out of Nigeria for citizens of the Yoruba extraction, saying the idea has grave consequences for the Muslims of the South West.

He said: “I have, for a very long time, unshakenly and unshakably been committed to promoting Muslim unity up and down the country. I was called names. However, I have since been vindicated.

“Nothing should be done to stop or reverse the growth of that unity. At this juncture, I should draw attention to the special danger posed for us the Muslims of the South West by the agitation for the creation of Oodua or Yoruba Nation out of Nigeria.

“Beside the evil consequences of a breakup of the country, the agenda of the agitators poses a big dilemma for the Muslims of the South West. Allah directs us as Muslims across ethnic boundaries to be bound by the Islamic brotherhood.

“On the other hand, ethic warlords want us to be bound only by ethnic sentiments and take fellow believers of other ethnic extraction for enemies. Who deserves our loyalty, Allah or ethnicity? The question is how are you going to defend yourself before Allah on Judgment Day if you had the wrong choice in the face of this dilemma?”

Noibi expressed gratitude to the current leadership of MUSWEN for initiating and executing the idea of a send-forth in his honour, describing the programme as a source of encouragement for him to do better in his devotion to Allah and preaching of Islam.

He expressed delight at the achievement of MUSWEN in the strengthening of the unity between the Muslims of Southern Nigeria, particularly the South West, and those of Northern Nigeria.

MUSWEN President, Alhaji Rasaki Oladejo, in a remark, said the celebration of Noibi was because of his many feats which he had “recorded in the sands of time” through his eruditeness and contributions to the growth and development of Islam across the world.

“This send-forth ceremony is essentially packaged to thank Allah for the mercies bestowed on Professor Noibi who has enjoyed a long and healthy life of dedication to da’wah,” he said.

A book of tributes entitled ‘An Icon in the Eyes of the People’ and another book entitled ‘Islamo-Nigeriana’, which were published in honour of Professor Noibi, were presented at the event.