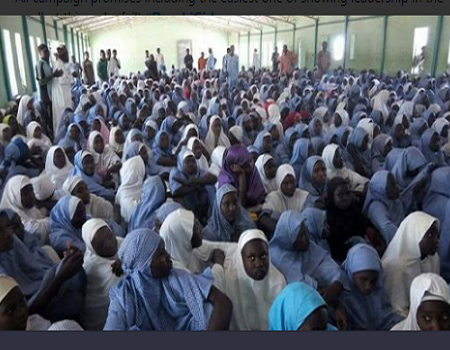 NIGERIAN military Service Chiefs brainstormed in Maiduguri over the directive by their commander in chief President Mohammed Buhari for them to rescue the abducted Dapchi students at all costs.

Speaking to reporters at the Command and Control Centre, Maiduguri on Thursday, the Director Defense Information, Brig-Gen John Agim said the Service Chiefs came into the war theatre to review the ongoing rescue operations, especially the directives to get back the abducted Dapchi schoolgirls.

The girls abducted by Boko Haram insurgents at Government Girls Science and Technical College, GGSTC Dapchi on Monday, February 19, 2018, are yet to be seen by their parents or even the military.

General Agim revealed that the Chief of Army Staff, Lt-Gen Tukur Buratai has solicited for the cooperation of the media and all Stakeholders in the operation to rescue the abducted girls.

He said that Buratai is asking for maturity in handling media coverage, adding that some sections of the media have been speculating and endangering the strategies of the military.

Agim said that the military is asking for anybody who had useful information that would help in the recapture of the students to help out because getting the girls back is very paramount.