by Tribune Online
in Top News
Reading Time: 5 mins read
A A 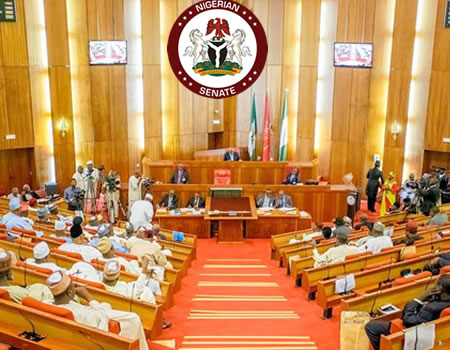 THE Senate on Tuesday commenced the process of amending the 75-year-old Police Act as a way of enhancing service delivery by the Nigeria Police Force.

This is a sequel to the passage of a bill for the repeal of the 75-year-old Act and the re-enactment of a new Police reform bill, 2018.

Deputy Senate Leader, Bala Ibn Na’Allah, who presented the Lead Debate during the second reading of the bill said that the Senate was seeking to repeal the Police Act CAP P18 LFN 2004 and enact the new Police Reform and related matters bill, 2018.

According to the Deputy Senate Leader, when the new bill is passed into law, it will make room for the Police that will protect the rights and freedoms of persons, which he said is envisaged in the Constitution of the Federal Republic of Nigeria, 1999 (as amended).

Na’Allah stated that Nigerians are persistently facing a situation where someone would be kidnapped ransom will be demanded, paid and nobody will be arrested.

He added that the new bill will lead to reforms in the Police such that it can “prevent the commission of crimes, detect crimes, apprehend offenders, preserve law order, protect lives and property and duly enforce all laws and regulations with which they are duly charged and such duties within or outside Nigeria as may be required of them by or under the authority of this or any other Act ensure cooperation between the Police Service and the various communities it serves in preventing and combating crimes, ensuring respect for the victims of crime; appreciating the needs of such victims and providing for effective civilian supervision of the Police.”

All policemen in Ajah division have been transferred — Police spokesperson

He also noted that the general idea behind the bill which he said was taken through the First Reading on May 30, 2018 is the “establishment of a service-oriented modern Police that will meet globally acceptable policing standards in a democratic setting to replace the current Police Force which was conceptualize and established in the colonial environment more to protect the colonial interest than to protect and safeguard the Nigerian citizen.”

He further stated that when the bill is passed into law, it will replace the Police Act, which came into effect on 1st April 1943 and has been amended over time.

He further said of the bill: “Section 5, which seeks to establish for Nigeria a Police organization to be known as the Nigeria Police to replace the Nigeria Police Force thereby removing the colonial vestiges of the police, making the Police more responsive to modern-day policing in an independent nation governed by the Constitution and laws promulgated thereunder and to bring it within acceptable global standards of police in democratic countries.

“Part Three of the Bill, which comprises sections: 8, 9, 10, 11, 12, 13, 14, 15 and 16 clearly establishes the hierarchy of the Police as contemplated by the Constitution, their Appointments, Duties; Functions and Powers.

“Unlike the existing Police Act, the Bill outlines the roles and duties of the Police hierarchy to avoid role conflict and to introduce a Responsibility Clause to make them more effective.

“Section 24(2) of the Bill forbids a Police Officer from being the prosecutor in a matter that he or she participated to promote and respect the principles of natural justice and allow for a free and fair trial.

“Section 28 of the Bill provides for the bail of persons arrested without a warrant to the effect that such persons shall not be kept in Police detention for more than 24hours without being charged to Court Within jurisdiction to try them. This is to bring the provision of the Act, when passed into law to conform with the constitutionally enshrined right to personal liberty as provided for by Section 35 (5) of the constitution and the African Charter on Human and people’s rights, which Nigeria has since ratified and which consequently is part of our municipal laws. ‘

“Part Eight deals with offences by a Police Officer. The Bill elaborates on existing offences within the existing Police Act and Section 51 particularly criminalizes the drinking while on duty of any intoxicating liquor. This provision is intended to prevent the abuse of weapons by a drunken Police Officer.

“Part nine seeks to establish Community Police forum and Boards in all the States of the Federation to consist of broad representatives of the community and the State to ensure effective, efficient and participatory community policing (Section 59).

“Divisional and State Police Boards are also established (Section 60 and 61 and the objective of such boards are stated (Section 62), to include:

1, Establishing and maintaining a partnership between the community and the Police;

ii, Promoting communication between the Police and the community.

Part Xlll establishes a complaint authority with its functions clearly spelt out in Section 78 to include:

i. Receiving complaints against police officers’ misconduct from the public and;

“We cannot envisage any meaningful reforms of the Nigeria Police without first and foremost, reforming the legal infrastructure under which it operates.

“The Bill is, therefore, that crucial step to reforming the Nigeria Police to make it amenable to the demands and expectations of our independent, democratic country that is an eminent member of an increasingly globalized world and to have a Police that is the product of our democratic experiences and expectations.

“The Bill is certainly not an absolute panacea to our policing problems but will be a major contribution to addressing it.”

All policemen in Ajah division have been transferred — Police spokesperson