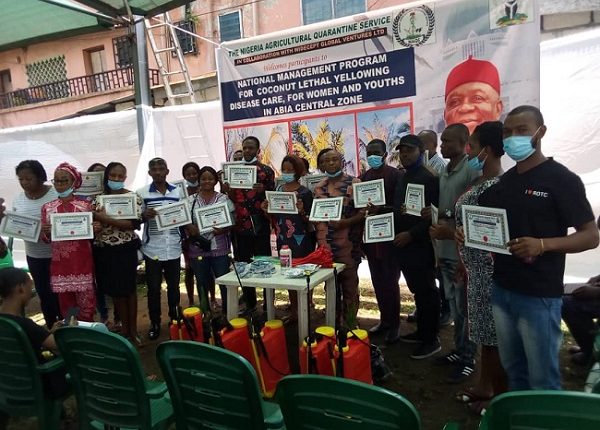 As a way to further empower Abia Central constituents, the Senator representing the constituency, Senator Theodore Orji at the weekend, trained sixty constituents in agriculture, agri-business and cosmetology

Speaking during the flag-off of the 3-day training in Umuahia, Senator Orji disclosed that this was part of the 8th edition of such training, having had it in several other places including Federal College of Agriculture, Ishiagu in Ebonyi State, (65 trainees), National Roots Crop Research Institute, Umudike Umuahia, (23), and National Centre for Agricultural Mechanization, Ilorin, (87), among others.

Represented by the Constituency Liaison Officer, Hon. Ifeanyi Umere, Orji said the training which was by the Nigeria Agricultural Quarantine Service, NAQS Abuja, would come with starter packs for the trainees on completion of the program, adding “as long as I am still at the senate, I will continue to do good to all manner of men, women, youths and children within the six LGAs of my constituency.”

The constituency training he said is for self-dependency and as an end to the perpetual search for white-collar jobs, stating that agriculture is now a viable alternative to crude oil.

He disclosed that another batch of the 8th edition for similar training would be held in December this year, and would be the 14th training sessions on agriculture, including in poultry, fishery, piggery and cosmetology.

Other areas, he said included hairdressing, barbing salon and much more, all aimed at empowering constituents with starter packs.

The training include Enterprise Development in Agriculture, Management of Coconut Lethal Yellowing Disease, among several others by Dr Benjamin Chukwuemeka Okoye, and Dr Nwadili Christian, among others from National Roots Crop Research Institute, Umudike Umuahia.

In spite of the huge investment in the water sector by the government and international organisations, water scarcity has grown to become a perennial nightmare for residents of Abeokuta, the Ogun State capital. This report x-rays the lives and experiences of residents in getting clean, potable and affordable water amidst the surge of COVID-19 cases in the state…  Sen Orji trains over 60 in agriculture, agri-business, cosmetology