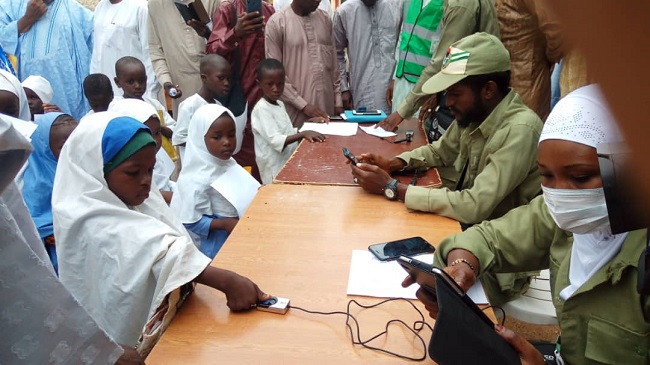 No fewer than 1.2 million pupils are currently benefitting from the National Home Grown School Feeding Programme (NHGSFP) in Kano State.

In its bid to ensure the efficiency of the scheme, the federal government has commenced the data capturing of all the beneficiaries which were aimed at increasing school enrolment across the country.

The Minister of Humanitarian Affairs, Disaster Management and Social Development, Sadiya Umar-Faruq, who flagged off the school enrolment exercise at Gurungawa Primary School, Kano, explained that the involvement of NYSC members, officials of the National Bureau of Statistics (NBS) and National Orientation Agency (NOA) in the exercise was geared towards ensuring authentic data.

The minister who was represented by her Technical Assistant, Mr Hashim Abubakar urged local education authorities, teachers, parents and other stakeholders to ensure that all eligible pupils are captured during the exercise.

She explained that it was President Muhammadu Buhari who created the ministry with a view to enhancing the living condition of Nigerians.

According to her, the government initiated what was called National Social Investment Programme (N-SIP), which has four components to achieve the set goal.

Umar-Faruq said that pupils from primary school one to three would be captured in all the public schools in the 36 states and Federal Capital Territory (FCT).

She also said that cooks would also be captured during the exercise.

The minister also reiterated the administration’s commitment to lifting Nigerians out of hardships through its social investment mechanisms to enable them to contribute to nation-building.

On his part, the State Programme Manager, Alhaji Abdullahi Yau, commended the minister for initiating the exercise with a view to have accurate data of the beneficiaries.

He said that 1.2 million children in the state were benefitting from the programme currently.

Yau, however, said that with the launch of free and compulsory education, pupils enrollment has significantly increased.

In his remarks, the Programme Focal Person, Malam Baba Aminu-Zubairu, said that the state has over 2 million children that need to be captured now.

In spite of the huge investment in the water sector by the government and international organisations, water scarcity has grown to become a perennial nightmare for residents of Abeokuta, the Ogun State capital. This report x-rays the lives and experiences of residents in getting clean, potable and affordable water amidst the surge of COVID-19 cases in the state.  School Feeding: 1.2m pupils currently benefitting from National Home Grown School Feeding Programme in Kano