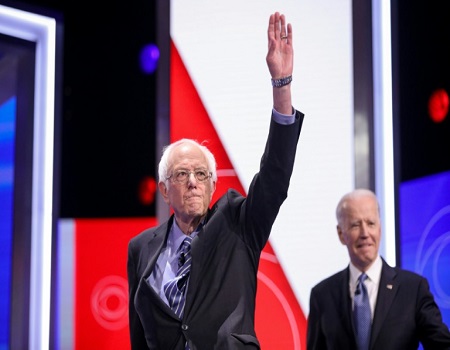 Bernie Sanders on Wednesday dashed speculation over an immediate end to the Democratic primary contest, saying he remains in the fight against centrist frontrunner Joe Biden, despite pressure to withdraw for the sake of party unity.

But in a brief, passionate speech carried on live television, Sanders also made clear that his main priority was to see the defeat of “dangerous” President Donald Trump. And he acknowledged that many Democrats see him as less electable than Biden.

Sanders had been holed up in his home state of Vermont overnight after suffering heavy defeats in primaries across the country Tuesday.

Speculation had been growing that he might respond to pleas from Democratic activists to step aside, giving Biden a chance to focus fully on campaigning against Trump.

But the fiery leftist broke his silence to say that despite his performance, he was still in the fight and preparing for his first one-on-one televised debate Sunday “with my friend Joe Biden.”

While he remained defiant, Sanders did make a number of unusual statements accepting his losses during the primary race and that he was “losing the debate over electability.”

Sanders then listed questions he wanted Biden to answer on how to deal with far-reaching inequality and other structural issues that he believes can only be addressed by radical economic change or “revolution.”

Biden’s trajectory to a November showdown with Trump began looking unstoppable after he scooped a series of devastating primary wins on Tuesday, including in the industrial powerhouse of Michigan – a state that will be crucial in the general election.

Biden racked up wins in Mississippi, Missouri, Idaho and Michigan, building on his come-from-behind triumph a week earlier on Super Tuesday.

Addressing supporters in Philadelphia as his victory took shape, 77-year-old centrist Biden reached out to Sanders, thanking the leftist Vermont senator and his supporters for their “tireless energy and their passion.”

The former vice president under Barack Obama struck a unifying tone as he affirmed on national television that he and Sanders “share a common goal and together we will defeat Donald Trump.”

Another of the six states on offer, North Dakota, was called for Sanders early Wednesday. He also led the count by around 2,100 votes in Washington state, the other major prize of Tuesday’s primaries, with around 70 per cent of the vote counted.

With Biden’s path to the Democratic nomination increasingly locked in, the overwhelming question is whether Sanders will swallow his pride and get his supporters behind the candidate – or risk party civil war.

“It will be vital for Sanders to mobilize his supporters behind the ticket,” tweeted Princeton University history professor Julian Zelizer.

“But Biden has to reach out to Sanders’s energized movement. It will require a two-way effort to unite the ticket.”

Many Democrats accuse Sanders and his devoted supporters of having caused fatal damage to Hillary Clinton four years ago when she was struggling – ultimately unsuccessfully – against Trump. They warn a similar scenario could play out this time.

Reflecting the shift in power, Democratic super-PAC Priorities USA, which had been neutral in the race, came out in support of Biden after Tuesday’s results.

“What tonight has made clear is that the delegate math is now a straight line to Joe Biden’s nomination,” chairman Guy Cecil told US public radio network NPR.

“So we’re going to do everything we can to help him in the effort looking forward to November.”

Adding to nerves in a country on edge after three tumultuous years under Trump, fears of the coronavirus pandemic prompted both campaigns to cancel rallies planned in Cleveland, Ohio.

The Sunday debate will also be without a live audience as a result of the health scare.