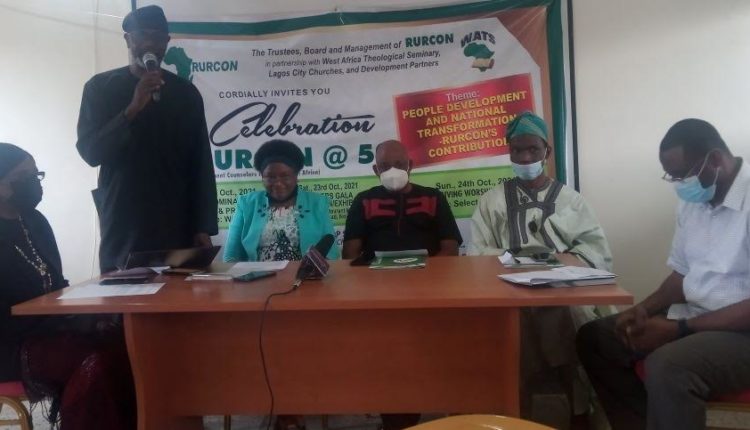 A faith-based development agency and professional development counselling agency, RURCON, has vowed to deepen its interventions among churches in Lagos on the eve of its 50th anniversary.

RURCON, which was founded in 1971 by Mr Peter Batcher and Da Bornaba Dusu to help African churches impact their communities, has been actively involved in projects in rural northern areas, especially in Plateau State.

The organisation with roots in the United Kingdom was registered in Nigeria as an NGO in 1995 and has been instrumental in some developmental works.

A member of the Board of Trustees, Rev Peace Goodey, told reporters at a briefing on the forthcoming 50th anniversary of the body, said RURCON was prepared to collaborate with churches in Lagos to help them impact their communities.

Goodey said: “Fifty years is a major milestone for an institution, as it is for an individual. Our celebration is not so much of festivity, but to pause and look back at what RURCON as a faith-based development Agency and Professional Development Counselling Institution has done across Africa. It is also a moment to look ahead at what can still be achieved especially now in Nigeria and in partnership with Lagos Churches, theological institutions, the Lagos State government, and the press.”

Goodey said the organisation would use the 50th anniversary to promote acceptance and implementation of the Church and Community Mobilisation Process tool in Lagos.

This tool, which she described as a validated faith-based tool, has been useful in community transformation globally.

She said the tool is already being used in five major Nigerian denominations and over 500 local assemblies.

Lagos churches in her words will benefit from this tool so as to strengthen RURCON’s “acknowledged impact across the world.”

She noted that RURCON has worked in 36 African countries, adding also that it “has gained recognition as a development agency that assists churches, Christian organisations, and individuals including communities.”

Goodey, who is presiding over the forthcoming celebration of the organisation, which holds from Friday, October 22 to Sunday, October 24, emphasised that RURCON is not a funding agency.

RURCON, according to her, is “an enabling, equipping and facilitating organisation that believes in self-reliance, sustainable lifestyles, and livelihoods based on good Christian stewardship, focusing on the poor, disadvantaged and marginalised.”

A member of the board of directors of RURCON, Rev (Dr) Eric Ighalo, said the church remains God’s instrument of transformation.

He observed that young people and the vulnerable in society were looking for where to draw strength.

“The church has the capacity to give support and succour to those in need. The Lagos church, in particular, has the influence and power to make things happen,” he stressed.

Ighalo said the problem of the church is more of its inability to harness resources for the common good and not necessarily that there are no resources to work with.

“The funds are there but the church needs to put a structure in place to harness the funds,” he said.

Rev Stephen Oyinlola, who represented the Lagos chairman of the Christian Association of Nigeria (CAN), at the event expressed the willingness of the CAN in Lagos to support RURCON.

The Provost of ACTS, Rev Ambrose Massaquoi in his contribution at the press parley observed that the church has always been skeptical of genuine intentions of para-church bodies.

“When an organisation like RURCON comes with an idea, instead of the church to embrace it, they see the organisation as coming to invade their territory and such don’t render needed assistance,” he said.

He also expressed hope that RURCON will not receive such treatment.

Rev Olugbenle Olumide, who represented the Lagos PFN chairman, said the PFN is already looking forward to collaborating with RURCON to make an impact in the churches in Lagos.

He disclosed that the PFN recently established a new directorate known as the Directorate of Community and People Development which will help drive the collaboration.

The 50th anniversary celebration has already begun across RURCON’s field offices in Jos, Plateau State and the UK office in London.

It will culminate in a major celebration in Lagos from October 22 to Sunday, October 24 with a courtesy visit to key church leaders.