Review of Mark W. Johnson and Josh Suskewicz’s Lead from the Future: How to Turn Visionary Thinking into Breakthrough Growth 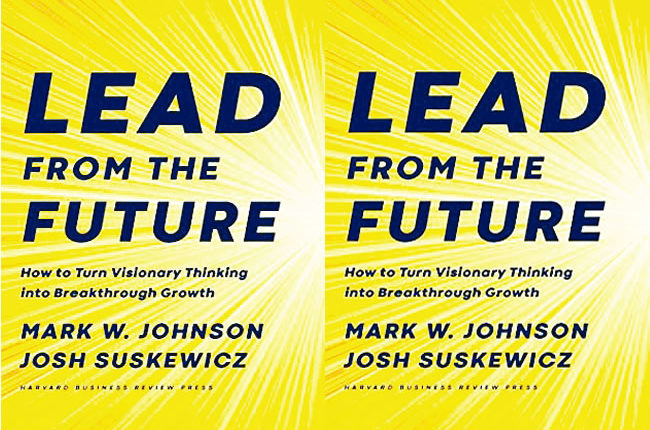 “LIFE can only be understood backwards, but it must be lived forwards.”  Søren Kierkegaard

After several days of negotiation at Camp David hosted by President Jimmy Carter, Prime Minister Menachem Begin of Israel and President Anwar Sadat of Egypt agreed to several major accords. At the press conference later, journalists were eager to know how, after thousands of years of bloodshed between the two countries, the agreements were achieved. Begin replied, “We did what all wise men do. We began at the end.”

That is precisely what Mark Johnson and Josh Suskewicz have in mind when introducing the concept of “Future-back” thinking. It begins with “setting aside your assumptions about the way things work today, think carefully about your destination — your organization’s target end state in the future — and then develop and implement a step-by-step plan to get there.”

They challenge their reader to begin with exploring and envisioning — “that is, actively, intensively, and imaginatively immersing yourself in your organization’s likely future environment and then determining what you must do to not only fit into that environment but to actively shape it to your needs so you can thrive in it…translate your vision into a long-term strategy and then walk it back to the present in the form of concrete initiatives that are programmed and implemented in the right way moving forward.”

Over the years, I have been involved in collaborative efforts to answer an especially important question or to solve an especially difficult problem. When all else failed (or seem to be failing), my associates and I applied Back-thinking without having a name for it. I guess we thought of it as reverse engineering. Once we agreed on the ultimate objective (or destination, if you prefer), we “walked back” from it in a series if specific steps. That is how many (if not most) of the most important questions are answered, many (if not most) of the most difficult problems are solved.

In the final chapter, Mark Johnson and Josh Suskewicz move beyond the business world to suggest wider applications of the Back-think approach. Well before I read the material in Chapter 8, I was already thinking about crises in my marriage, parenthood, grandparenthood, and other relationships that could have been handled much more effectively had I taken that approach.

“The discipline of future-back thinking compels leaders to ask hard questions about both their future and their present — and reminds them of their ultimate purpose.” The same compulsion occurs when people must decide whether or not to follow and support those leaders. Command and control still prevails in the military but even there, respect and trust or lack thereof often determines which leaders succeed or fail. Sadat and Begin were well aware of what could happen after they returned from Camp David.

The potential value of this book will be limited only by the nature and extent of each reader’s willingness and ability to apply what Mark Johnson and Josh Suskewicz explain so well.