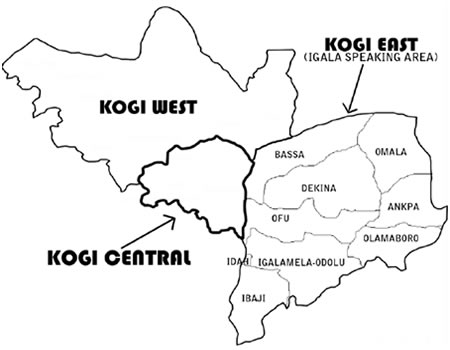 Uk’omu Igala, an umbrella body for all socio-cultural organisations in Kogi East senatorial zone, has kicked against restructuring of the country, along the old regional arrangement  as was the practice in the First Republic.

Addressing newsmen at a press briefing in Abuja, the national leader of  Uk’omu Igala, Major General Patrick Akpa (rtd), declared  that rather than return to Regional Government, the Igala nation was in support of the present  federal system, but called on government to create Okura State in the interest of equity, justice and fairness.

He said: “We reject any proposal for restructuring Nigeria which takes us back to the idea of regionalism as if we are so forgetful about the ugly experiences of the First Republic.

“Regional governments in the First Republic squeezed and emasculated the minority ethnic nationalities in the North, West and East, and the bitterness associated with the report of the Willink Commission which rejected the quest of minorities for separate states did not die until the premature collapse of the Republic.”

Affirming the support of the Igala nation for the unity of the country, General Akpa said the agitation for restructuring would become needless once the nation has purposeful and visionary leadership.

“We believe that, like other nations built on multiple and diverse identities, Nigeria can become a great country with a purposeful and visionary leadership which Nigerians have desired since Independence.

“It is such a leadership that provides a rallying point for good governance, justice, equity and the rule of law. No separate Igbo, Yoruba, Hausa and Tiv or Igala nation can fulfill the aspirations of its members or stand the test of time if these ingredients are in short supply.

“Democratic governance offers Nigeria the rare opportunity to reconfigure the Nigerian state to become a truly federal democracy that she aspires to be, in which fiscal and political autonomy at sub-national levels co-exists without tension with a strong national government capable of being a mirror for its constituent elements.

“Ukomu Igala,   therefore, concludes that we can do all that is necessary to reinforce Nigeria’s unity and that among others, political restructuring that respects self-determination within a united federation provides a part of the answer. It provides only a part of the answer because restructuring alone cannot end agitation in Nigeria if it is not firmly grafted on sound democratic governance, equity, fairness and the rule of law.’’

He further expressed the Igala nation’s rejection of the proposal by the North-Central Caucus at the 2014 National Political Conference which called for the creation of Kainji State from Niger and Kebbi States, ‘’instead of recommending the creation of Okura State that has been on the front burner of political discourse since 1981.”

He said, “Insisting on the creation of Kainji State out of Niger State (North-Central) and Kebbi State (North-West) will definitely alter the geo-political configuration of Nigeria,” adding that the creation of Okura state is “the natural equitable expression of political balance in the state creation exercise.”

Igala nation therefore declared its support for the retention of federalism and “the recognition of the rights of ethnic groups within the states to express their right to self-determination. It also called for the devolution of power as the “over-concentration of power at the centre (is) to the detriment of the federating units.”

General Akpa further advised government to  review  the percentage of revenue allocation to states producing oil, the reconstruction and rehabilitation of arrears affected by insurgency and other conflicts and the diversification of the Nigerian economy by “fast-tracking the development of solid minerals sector.”

The press conference was attended by executive members of the group, drawn from all  socio-political groups in Kogi East.

How PDP will recapture power in 2019 ―Makarfi