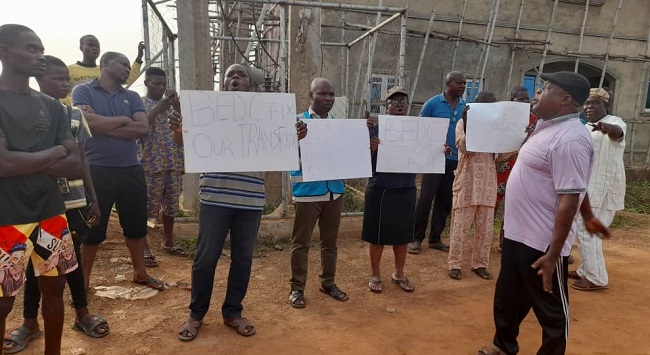 The residents of the Parliament Estate in Akure on Friday, protested over the failure of the Benin Electricity Distribution Company (BEDC) to energise the transformer in their locality, issuing a 14-day ultimatum or face the wrath of the community.

The protesters armed with placards stormed the Akure office of the BEDC and threatened to visit the headquarters of the electricity company in Benin City, the Edo state capital and shut it down.

Speaking during the protest, Chairman of the Parliament Estate, Engr Titus Falana, said members of the residents had contributed money to buy the transformer since 2019 and all efforts to get the BEDC to energise the transformer have failed.

He said “We bought poles, cables and all necessary things. We have made every arrangement but they are saying some people here are owing but we suggest they should migrate the debtors to the metering arrangement so that they can pay little by little.

“We will carry out a bigger protest to Benin, the BEDC headquarters. It is terrible that we spent over N10m to buy transformer and others facilities and nothing has happened.

“A bigger protest is coming that will embarrass them if they do not energise this transformer within two weeks. They did not contribute any money to the project. For over two years they have not done anything here even though we contributed our money. We are appealing to the government to ensure this transformer is connected.”

He said they opted to purchase the transformer after the power supply to the estate destroyed their electrical devices.

“We are protesting because of the transformer we bought that has not been connected. This transformer has been there for more than two years.

“We spent more than N10m but the BEDC is giving flimsy excuses. At a point, they said some people are owing. It is not our duty to go and collect the debt owed to BEDC. They should energise the transformer so that it will make more money for them.

“We cannot burst into another person’s apartment to force people to pay electricity bills, they know how to collect their debt.

“We have been suffering here. The electricity has damage our devices. No houses here can use a fridge. The power given to us cannot power anything. They said it was the problem with the transformer, so we decided to buy one to solve our problem. They do not want to connect us for reasons we do not know.”

While reacting, the spokesman of the BEDC in Akure, Mike Barnabas, said the protesters paid N600,000 electricity bill out of over the N1m debt owed but said the transformer would be energised immediately after the debt is paid.

He said the landlords are owing electricity bills and had to clear their debt as it was a new transformer that has been installed.

“Individual landlord knows what he is owing. They should pay up so that we can start on a clean slate,” he said.