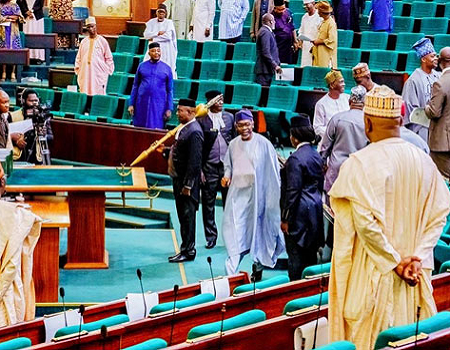 The House of Representatives on Tuesday unveiled plans to investigate the planned concession of four airports across the country.

The resolution was passed sequel to the adoption of a motion sponsored by Deputy Chairman of the House Committee on Privatization and Commercialization, Hon. Kolade Victor Akinjo, who underscored the need to save public assets and safeguard the rule of law.

In his lead debate, Hon. Akinjo who disclosed that the Committee received “torrent of petitions as it concerns the concession of the national assets,” observed that Federal Government embarked on privatization and commercialization of public enterprises to introduce private sector resources and discipline, create jobs, reduce the burden of funding of the public enterprise on the national treasury in line with global best practices.

He maintained that the two committees saddled with the responsibility of privatisation and concession of public assets namely: Bureau of Public Enterprises (BPE) and Infrastructure Concession Regulatory Commission (ICRC) are not aware of the plans which have reached the advance stage and adverts placed in some newspapers.

“The House further notes that the NCP succeeded in the concession of the Nnamdi Azikiwe International Airport to a core investor in January 2007 but the process was aborted for security reasons and the matter is pending in court.

“The House is aware that the Federal Ministry of Aviation has commenced the process to concession the aforementioned airports but without the involvement of NPC and BPE which is in violation of the Public Enterprises (Privatization and Commercialization), 1999 Act.

“The House is concerned that Federal Government may not be able to realize the objectives and aims of the concession to attract credible investors because of potential litigations as a result of the breach of the provisions of the BPE Act and other relevant Acts,” Hon. Akinjo said.

In his intervention, Hon. Chinyere Igwe who spoke against the motion stated that the relevant government authorities are still in the process of planning the concession of the airports, hence the prayers of the motion are preemptive/speculative, adding that the House should not be seen as a meddlesome interloper.

He said: “Penultimate this issue was on the front burner of the Nigerian media that a Federal Ministry of Aviation is planning. The keyword is planning to concede. As we speak the process has not been released.

“So I move that let us not be too hasty in becoming a meddlesome interloper for an issue that the Executive has not concluded. It is when the process has been completed that we can say the due process was not followed. That is my correction.”

Deputy Chairman, House Committee on Rules and Business, Hon. Ademorin Kuye, who noted that a similar motion had earlier been brought to the floor of the House and referred to the House Committee on Aviation, adding that the committee had set up a sub-committee led by Hon. Lynda Ikpeazu and the matter is being investigated as the minister of aviation, organized labour as well as other relevant stakeholders who were invited made their submissions.

Speaking further, Hon. Akinjo disclosed that the committee is not in the know of the recent exercise, as it is known that the process of concession has begun.

To this end, the House mandates the joint Committee on Aviation, Privatization & Commercialization and as well as the House committee overseeing the ICRC investigate the issue and report back within four weeks for further legislative action.