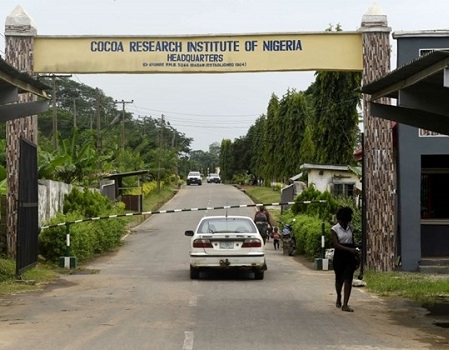 Share
The House of Representatives on Wednesday called on President Muhammadu Buhari’s administration to revamp the cocoa research institute in Nigeria in the bid to complement the country’s economic diversification policy.
The resolution was passed sequel to the adoption of a motion sponsored by Hon. Julius Ihonvbere underscored the importance of the Institute to the nation’s economic prosperity.
In his lead debate, Hon. Ihonvbere observed that Agricultural sector presents Nigeria with the opportunity to diversify her economy in line with the vision of the Federal Government to reduce over-dependence on oil as the major source of revenue.
“The economic history of Nigeria reveals that until the 1970s, Agriculture was the backbone of the economy, especially the production and exportation of cocoa.
“The House is aware that prior to the 1970s, Nigeria was a major producer and exporter of cocoa following the establishment of Cocoa Research Institute of Nigeria (CRIN) in 1964 and the creation of 6 substations across the six geo-political zones in Nigeria to boost the production of cocoa and other cash crops.
“The House is informed  that the substations are located at Owena (Ondo State) which caters for cocoa, robusta coffee and kola; Uhonmora (Edo State) which caters for cocoa; Ochaja; (Kogi State) for cashew and kola; Ibeku (Abia State) caters for cocoa and cashew; while Ajassor (Cross River State) caters for cocoa and Kola; and Kusuku-Mambilla (Taraba State) caters for Arabica coffee and tea.
“The House is aware that the Uhonmora Substation that was established in 1967, with office block, rest house, Clinic and 20 residential quarters, has made extensive and invaluable contributions via research that supported the work of cocoa farmers in this marginal forest area.
“The House is concerned that due to low level funding of Research in the past years, the infrastructure in this substation have dilapidated to such a sorry state that it can no longer carry out serious and sustainable research activities as well as create wealth and employment opportunity for the people which in turn, greatly affects the economic growth of that sector, and has completely defeated the mandate for which the Institute was established.

“The House is also informed that approximately 30 to 40% of all potential cocoa production are lost to diseases with farmers suffering the major loss due to the poor research capacity among other reasons and this has also contributed to the low production of cocoa in the country,” he noted.
According to him, in macroeconomic terms, Nigeria’s global cocoa production rating has dropped from second to the fourth position at a time of rising demand for cocoa in the world market.
He noted that the Cocoa Research Institute of Nigeria (CRIN) substation at Uhonmora is a research centre in name only, lacking laboratories, electricity, facilities and also holding insufficient administrative staff, with dilapidated and uninhabitable buildings without library or computers and equally, with low budgetary allocation.
To this end, he urged Federal Ministry of Agriculture and Rural Development and the Cocoa Research Institute of Nigeria (CRIN) to propose a workable agenda for revamping the substation at Uhonmora, Edo State.
In the same vein, the House stressed the need for Federal Government to upscale the Institute’s budgetary allocation to fast-track revival of research activities at the substation that has been grounded.
In the bid to ensure access to the facilities, the House beckoned on authorities of Federal Ministry of Works and Housing to carry out works at the various buildings, health facility and staff quarters as well as road leading to the Uhonmora substation.
The House further urged Federal Ministries of Works and Housing and Science and Technology to provide standard research equipment needed for the effective functioning of the Uhonmora Substation at Owan Federal Constituency of Edo State.
To this end, the House ​mandated the Committee on Agriculture Colleges and Institutions to ensure implementation.
CocoaCRIN
Share

Ladoja has contributed to development of Oyo State ― Ayorinde