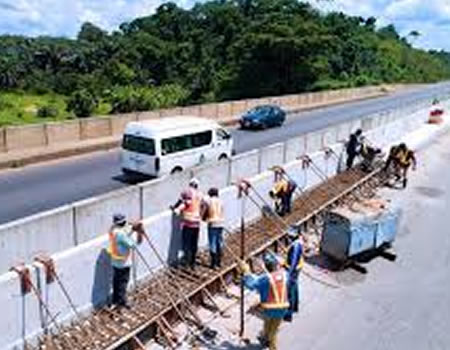 The House of Representatives member on Wednesday urged the Federal Government to complete the rehabilitation and reconstruction of Gbongan-Iwo-Oyo road without further delay.

The contract for the rehabilitation and reconstruction of the road was awarded in 2011 at the sum of N6.9 billion to Kopek Nigeria Limited with a completion period of 18 months, out of which the sum of N2.8 billion had been paid.

In his lead debate, Hon Akintola observed that the Gbongan-Iwo-Oyo road is a very important Federal road linking Osun and Oyo States in the South Western part of Nigeria.

“Sometimes in 2011, the Federal Government awarded the contract for the rehabilitation and reconstruction of the said road to Kopek Nigeria Limited at the cost of N6.9 billion with a stipulated completion period of 18 months.

“The House is aware that President Muhammadu Buhari’s administration has so far paid about N2.8 billion to the contractor handling the project since 2017, and the contractor confirmed that as at 2018 that the Federal Government wasn’t owing them

“The House is also aware that in 2018 when the Southwest director of the Federal Ministry of Power, Works and Housing inspected the project on behalf of the former Minister in charge, he stated that the Federal Government was committed to the speedy completion of the road.”

While calling for the intervention of the House, Hon Akintola argued that “despite the payment of the aforementioned sum to the contractor, the pace of work on the road is very slow and discouraging as asphalt overlay has stopped at Osunwoyin which is about 7 kilometres to Iwo in Osun State

“The House is worried that the road is not motorable between Iso in Osun State and Oyo in Oyo State.

“This has seriously affected inter-state transportation between Osun and Oyo state also hampered the movement of passengers and agricultural produce from that area to other places,” he noted.

While ruling, Hon. Idris Wase, Deputy Speaker who presided over the plenary session explained that the Standing Committee on Works will invite Federal Ministry of Power, Works and Housing and Kopek Nig. Limited to make clarifications on the project and report back to the House within 4 weeks for further legislative auction.