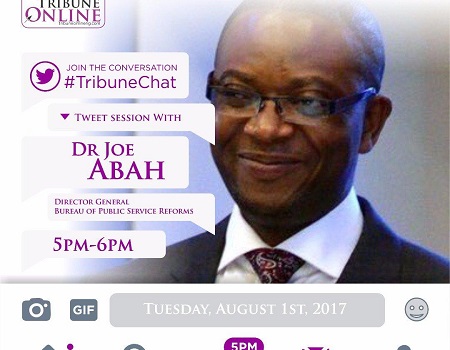 THE Director General of Bureau of Public Service Reforms, Dr Joe Abah, has stated that drivers’ license renewal can be done from your bedroom.

Dr Abah added that Passport renewal is improving following a backlog occasioned by booklet scarcity in the time.

During a Twitter chat engagement with the Tribune Online on Tuesday, Dr Abah bemoaned lack of funding of his organisation, but added that “through social media, you can feel the pulse of the country and use that to design your reforms. The reform has recorded some positive successes regardless.

“The key achievement has been to ‘reform the reforms’ and to show that improvement is possible. We’ve also shifted the focus of public service reforms from the public service to the public. We are like an internal Think Tank to the government.

“We advice and recommend. No enforcement powers. We show that it is possible to do things better and then employ peer pressure to drive change. The issues of policing are complex. You have a combination of a command and control structure.”

When asked about the cumbersome nature of procuring or renewing drivers’ license and the international passport, Dr Abah stated that “renewal of drivers’ license is smooth and easy. It can be done from your bedroom. Passport renewal is improving following a backlog occasioned by booklet scarcity.

He hinted that Bureau of Public Service Reforms is currently working with the Health Minister to improve on the foot dragging responses in hospitals, during emergency cases.

Reacting to issues bordering on why public servants prefer to use foreign facilities, Dr Abah stressed that “Two important aspects of democracy are choice and competition. We’re not under military rule.”

The Director General of the Bureau of Public Service Reforms, while responding to questions on whether merger in ministries have been productive and policing policies, he revealed that merging ministries into one entity is a “painstaking work, it’s not perfect but there’s progress.

“The issues of policing are complex. You have a combination of a command and control structure coupled with institutionalised corruption. With an exploding population and low productivity, percentage of expenditure on public service appears too high,” he said.

I have stopped my pension in Kwara, Saraki says