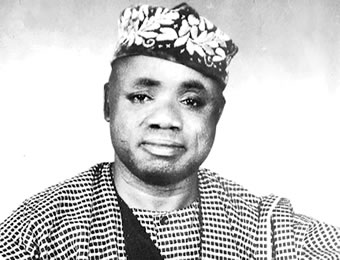 EVERY town or community has its shining stars that would etch the name of the community or town in the heart of the people, for example, Chief Obafemi Awolowo’s Ikenne;  Samuel Ladoke Akintola’s Ogbomoso; TafawaBalewa’s Bauchi; Goodluck Jonathan’s Otuoke and William Shakespeare’s Stratford-upon Avon, United Kingdom and Fagunwa’s Oke-Igbo.

Daniel Orowole, later (Olorunfemi) Fagunwa, was born to a family of Christian pioneers in Oke-Igbo, in the present day Ondo State, in 1903, Aderinsoye Ologbenla, an Ooni-elect, who had reigned in Ile-Ife for eight years and continued in this capacity until his death in 1893, was a scion of the Giesi ruling house, Ile-Ife. His name wasAderinsoye, but popularly called Derin. The short form of his name, Ologbenla” is one of his praise names, meaning-”a person who inflicts heavy wounds.”

After Derin Ologbenla’s army, in his war expedition, had conquered the Ondos, he left Ondo to pitch his army in Olori-Igbo, seven miles to Ondo. Later, his army decided to found a town, in memory of their conquest and chose the present Oke-Igbo site, where they first passed their fateful night; “let’s move to this hill in the bush.”(Oke Igbo).

Oke-Igbo is a hilly and thickly-forested environment. Daniel Olorunfemi Fagunwa attended St. Luke’s Primary School, Oke-Igbo, from 1916 to 1924 and then taught there afterwards, as a pupil teacher for a year. He then trained as a teacher at St. Andrew’s College Oyo, from 1926 to 1929. He was the foundation Headmaster at St Andrew’s Practising Primary School, Oyo from 1930 to 1939. It was in Oyo that his writing skill blossomed, most especially in folk philosophy, which draws heavily on folk tale traditions, including supernatural elements, gnomes, witches, wizards and Yoruba hunters who were usually his heroes.

In 1938, he entered a literary contest with his first major work- “Ogboju Ode ninu Igbo in irunmale” which was widely considered to be the first novel written in any African language. The Nobel laureate, Wole Soyinka, translated this book into English Language in 1968 as “The Forest of a Thousand Demons.”

His later works include “Igbo Eledumare” (Forest of God) in 1949, “Ireke Onibudo”(The Sugar Cane of the Guardian)in 1949, “Irinkerindoninu Igbo Elegbeje” (Expeditionto the mount of thoughts) in 1954 and “Adittu Olodumare.” (The Secrets of the Almighty) in 1961. He was also writing Part two of “Adittu Olodumare” which he called “Ireola Olodumare” (Experience in the Land of the Almighty), before his demise. Unfortunately, nobody could trace the manuscript after his passage.

Writers are usually strange people. In the course of writing the book, Fagunwa, like a mystic, had to look for a bush path. He left Oyo town and moved towards Ibadan road. Somewhere along the road, he created a path, through a bush, to a very big tree, which was so huge, that one could not see sunrays under the tree. He brought a small table, a chair and books underneath the tree to begin writing his first novel- “Ogboju Ode ninu Igbo Irunmale.”

Fagunwa did not know that opposite the bush path he created, there was a woman selling yam and other things in a kiosk. He did not know that the woman was suspecting that he was not a human being. He used to come out of the bush to buy yam and returned there. The bush path did not lead to anywhere. The woman then contacted some hunters and villagers to search the bush. God saved him, the period they came was when he had gone to buy yam; otherwise, they would have searched the place and could have killed him.  He was returning to the bush after buying yam when those men stopped him.

They asked him where he was going and where he came from; he said he told them story about himself. They asked- “you say you are writing a book, is it in the bush that writers work?” They followed him inside the bush and behold, they saw a chair and table and books on the table. They asked him where he originated from, he told them that he was the Headmaster of St. Andrew’s Practicing School, Oyo; that was how they spared him.

Fagunwa, in his active writing years, had very little time to himself, even though he was married to two wives.

He used to get up in the night and drive out. He went to cemeteries and other places, sat there and thought of what to write with an expectation that perhaps a spirit would come up and say something to him.

His Personal Assistant/ Confidant, Anthony Olajide Fayemi, an indigene of Ile-Ife, recalled that if you travelled with Fagunwa from Ibadan to Lagos, when there was not much traffic gridlocks, you could spend several hours on the road… Why?

He never went straight to his destination. If a rabbit ran across the road, he would ask the driver to stop, he would check where it passed and ask what it meant if a rabbit came from the left side of the road to the right side. He would query himself. If it was a bird, he would stop, and if the bird flew or ran somehow, he would have something to put down.

Fagunwa was always constantly researching and writing. He died in 1963 after an accident at a river in Niger State, and he was buried at the cemetery of the St. Luke’s Anglican Church, Oke-Igbo,  his home town on the 10th of December, 1963. His body did not disappear as it was speculated.