In what could pass for an open heaven, Lagos experienced a downpour for hours from the early hours of Saturday and by the time it subsided, an ugly memento of six dead persons, two collapsed buildings and other sorrowful tales from the residents was left behind.

Many parts of the state reported heavy flooding, in what could pass for a major breakdown in the drainage system of the state.

With the downpour and the attendant flooding dominating the social media space, it was reported that flood as deep as 18 inches above the road took over prominent areas in the state.

Some of the areas said to have been affected included Ogunnusi Road (Ogba to Ojodu), with flood said to be at Omole inward Berger.

Sunday Tribune on Saturday reported heavy vehicular gridlock due to the downpour and flooding.

Accompanied by terrifying visuals, flood was said to be about 18 inches deep around the same area, after FRSC/VIS compound inward Berger, at about 5.30 am, when visibility is usually very poor, coupled with the bad weather.

Awolowo Way, Ikeja, from Allen junction towards Ikeja Bus Stop, was also  flooded, with motorists being asked by concerned residents to avoid in particular the space between Fan Ice and Ikeja Bus Stop.

The same advisory also went to those wishing to access Olowu Street in Ikeja, with inward Mobolaji Bank Anthony, towards the end of the said road, reported in, as very badly-flooded.

Around Toyin Street was also enough flood to warrant the same advisory. Alade Market in the same axis was also dubbed near impassable, same as Allen Avenue, from Opebi, towards Awolowo Way.

Ikeja is the capital of the state and houses the seat of power.

Other major areas of the state didn’t fare any better.

From Gbagada to Victoria Island, and Lekki to Ikorodu, it was the same story of flooding, traffic lockdown and homes being completely submerged by flood.

Many motorists were forced to drive through pool of water so high above the road that nearly all the lower part of their vehicles, was completely covered with water, with practically everyone driving with full headlight on, in broad daylight.

An old building gave way in Ita Elewa in Ikorodu, with the Lagos State Emergency Management Agency (LASEMA) threatening to invoke the full weight of the law setting it up, in seizing such property.

According to the statement from Nosa Okunbor, its spokesperson, “The Lagos State Emergency Management Agency, LASEMA, has today recommended full implementation of the existing law on collapsed building in Lagos State.

“The law that not only stipulates removal of debris after rescue, also includes seizure of such property for constituting risk to other residents within the immediate and those close to the building as at time of the incident.

“This recommendations came on the heels of the Ita Elewa, Ikorodu collapsed building incident which immediate cause was attributed to the heavy downpour of today when it collapsed before midday.

“Further investigations revealed that aside the heavy downpour, the obviously old building constructed with mud bricks, had been seriously distressed over time with visible cracks on it’s other yet-to-collapse sides.

“Parts of the old storey building which collapsed this morning at Rademo Street, behind recreation center, Ita Elewa Ikorodu, has so far not recorded any loss of life, nor injuries as time of filling this report.

“In order to avert danger to adjoining buildings and other users of the environment, LASEMA has recommended strongly that its remains be pulled down down, the debris removed and the property forfeited to the Lagos State Government as stipulated by law.”

The agency, kept busy all through yesterday by the various damage done by the rain and flood, also issued another statement announcing another building collapse in Magodo Phase 1, with a family wiped out, save the father, a O’Pay (bike) rider.

“The incident which occurred during this morning’s heavy rainfall before midday, saw the husband, Mr. Emmanuel Utache, who sustained different degrees of injuries being rushed to a hospital in an unknown destination before arrival of LASEMA for the rescue operation.

“The now concluded operation in which LASEMA bagged remains of the dead Utache family and relative, were handed over to their extended family members.”

Yet again, there was another statement announcing a lone truck accident at Costain, due to the said rain.

According to the agency, “A truck with unknown registration number conveying two 20ft containers fell sideways at Costain area of Lagos, inward Ijora today during the down pour.

“The lone accident was attributed to tyres of the truck getting stuck in a pot hole covered with water in a failed portion of the road which was not visible, as a result of the flooded road resulting from the rain.

“Though there were no lives lost, but the driver of the truck who sustained minor injuries, had been taken to a nearby hospital for treatment by sympathizers before arrival of LASEMA.

“LASTMA and members of the Nigerian Police Force were co-responders that took charge of traffic control at the incident scene, while LASEMA conducted the recovery operations with its heavy duty equipment.”

News Agency of Nigeria (NAN) also reported that flood swept away, an 11-year-old boy and another person who attempted rescuing him, identified as Wasiu. at Aboru and Iyana-Ipaja in Alimosho area of the state.

The duo was reportedly swept away at a canal linking Aburo and Iyana-Ipaja on Ige Road.

NAN correspondent, who visited the scene of the accident, observed a huge crowd wearing sad faces due to the incident that occurred following the overflow of water from the canal.

LASEMA however didn’t confirm this particular incident and didn’t speak on it.

NAN further reported that two young boys sent by their parents to buy cooking gas at a gas station fell into a drainage that serves as a channel to the canal.

Three young men attempted rescuing the boys and succeeded in rescuing the older one, but one of the rescuers popularly known as Wasiu Stubborn was swept away while trying to rescue the other victim.

Speaking to NAN at the scene, Mr Solomon Agboghoroma, a Community Development Association leader in Oki Town, regretted the development, saying that the government had failed to construct a bridge to prevent such incidents.

Agboghoroma, who recounted the ordeal of landlords and residents of the area anytime it rained, said that there was the need to expand Aboru road and build a bridge at Cement Bus Stop to forestall recurrence of such tragedy.

“This rain started almost four or five days ago but the one of last night was one of the heaviest and it started around 2:15 a.m. and by 3:15 a.m., it came with full force and everywhere was flooded.

“Around 7:30 a.m. or 8:00 a.m., we learnt that an OPC member, who was a security guard in one of the gas stations here had been carried away by flood while trying to rescue two children who came to buy gas but fell into the drain.

“The gas station had not opened because of the flood as the whole place including the canal had overflowed its banks.

“The children fell inside the gutter. This OPC boy went and rescued one but in the process of rescuing the second child, he and the boy fell into the canal and that was the end,” Agboghoroma said.

He blamed the government for the tragedy, saying that several petitions had been written to successive governments in the state from the time of former Governor Babatunde Fashola to the administration of Governor Akinwunmi Ambode. 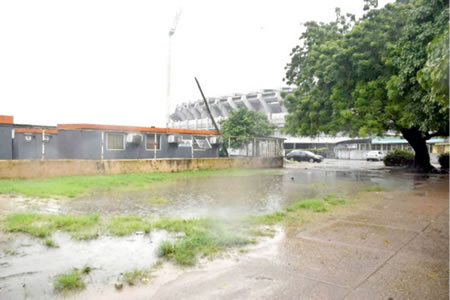 “People have been dying in situation like this here and all landlords have tried, including raising almost N4 million for dredging of the canal.

“The government knows what to do when it is ready because this canal contract was award sometime in 2011 or 2012. When we taxed ourselves, Fashola came and commended us and promised palliative measures and government takeover.

Mr Suleiman Adedokun, an eyewitness and a shop owner beside the canal, told NAN that the rescuer, named “Wasiu Stubborn “, entered the drain to rescue the boy but the flood swept both of them away into the canal.

“Wasiu tried, succeeded in catching the second boy but his effort to come out of the drain proved futile as it was not easy for him due to the force of the water.

“It is the bad road and narrow culvert that caused these deaths because these two children that fell inside the drainage didn’t know it was there as water covered everywhere,” Adedokun said.

An officer of the Lagos State Neighborhood Safety Corps, who spoke to NAN on condition of anonymity, said that the agency got the information around 9:00 am that flood carried away one Mr Wasiu a.k.a, stubborn while trying to rescue two children.

He said that the LSNC had made efforts and called relevant agencies of government, who he said may arrive the scene anytime.

“We are trying to locate the parents of the children and also to contact the family of Wasiu,” the LNSC officer said.

Responding to the development, Lagos State Commissioner for Information and Strategy, Mr. Gbenga Omotoso, said many hours of downpour in the state on Saturday occasioned what he called flash flood in some parts of the metropolis.

According to him, “the rain fell for several hours and there was no way there won’t be those flash floods.”

He however insisted that the flood receded immediately after the rain, pointing out that residents have since had the opportunity of moving around and doing their businesses.

For instance, he said for someone like him who lives on the mainland, he had already made his way to the Island from where he claimed he was speaking with Sunday Tribune, as an evidence of the disappearance of the flash flood.

“You know that today’s rain went on for hours and there is no way the rain can fall without having flood, but if you look around now the flood had disappeared, there were just flashfloods, they would there for some hours. I live in Ikosi, before Magodo, as I speak now, am at Awolowo Road Ikoyi for some meeting and it was a smooth ride,” he said.

While acknowledging the efforts of the State Ministry of Environment in the clearing of blocked drains and sensitization of the citizenry, on how best to dispose their waste, the commissioner said “some still engage in unwholesome act of throwing theirs in the gutters and drains whenever there is rain, thereby blocking the drains that were already distilled.”

Omotoso frowned on the act, but assured that the state government would continue to embark on sensitization of the people on the dangers of blocking the drains with their dirt.