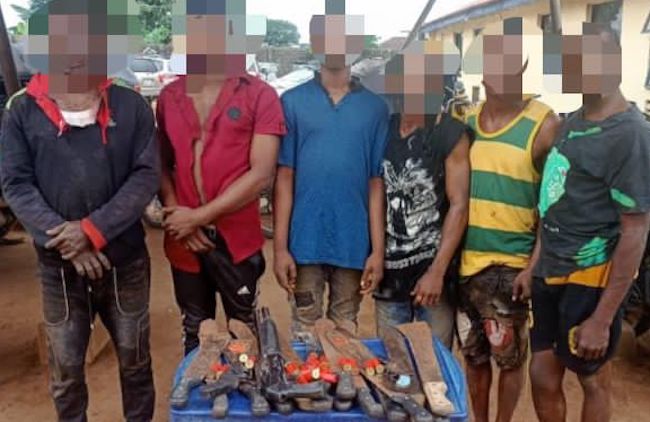 The Imo State Police Command have raided bandits’ location at Obudi Agwa in Oguta Local Government Area of Imo State and arrested six of them.

The arrest followed a distress call on 10th August 2022 that some of the bandits that escaped arrest during the Izombe and Agwa raid conducted by the Command’s Tactical Teams, were sighted to have regrouped, blocking the road along Obudi Agwa, stopping vehicles, searching the occupants and checking their phones to identify policemen in the vehicle for possible abduction.

The command in a statement issued by the Police Public Relations Officer, CSP Michael Abattam on Saturday said that the Command’s tactical teams immediately mobilised, joined by police operatives from Agwa Police station.

He said that they stormed the identified location at Obudi Agwa road, cordoned the area and arrested six bandits.

The bandits according to the Police Spokesman include a 30-year-old Mmadukaji Moses of Mgbala Agwa, wearing police operational vest suspectedly owned by one of the slain police officers in the Agwa Police Station attack.

He said that the operatives swiftly and tactically disarmed the bandits and recovered their weapons, which include one English-made automatic pump action gun, two locally made pistols, twenty live cartridges and fourteen sharpened machetes, to the station.

CSP Abattam said that in the course of interrogating the suspects, it was discovered that they are all natives of Agwa while the one who was putting on police operational vest, is undergoing further interrogation to confirm the source of the police vest adding that as soon as investigation is concluded, they will be charged to court.

The Commissioner of Police, Imo State Command, CP Mohammed Ahmed Barde while commending the officers for their proactiveness and prompt response, called on Hunters Association to collaborate with the police and other security agencies in giving information on criminal hideouts observed in the bushes.

He appealed to Imo people not to allow terrorists use their communities as safe haven to perpetrate heinous crimes but should rather report any suspicious activity observed within their neighbourhoods to the nearest police station or call the Command’s emergency numbers: 08034773600 or 08098880197.

If you want to keep your job and excel in your career, you need to do as I say,” Janet Abegunde’s boss said to her one fateful day. Miss Abegunde, a 24-year-old accountant who had just gotten her first job in one of the new generation banks, said she fell into depression after her boss sexually harassed her.Police raid bandits’ location. Police raid bandits’ location

How to make the most out of a life-changing event