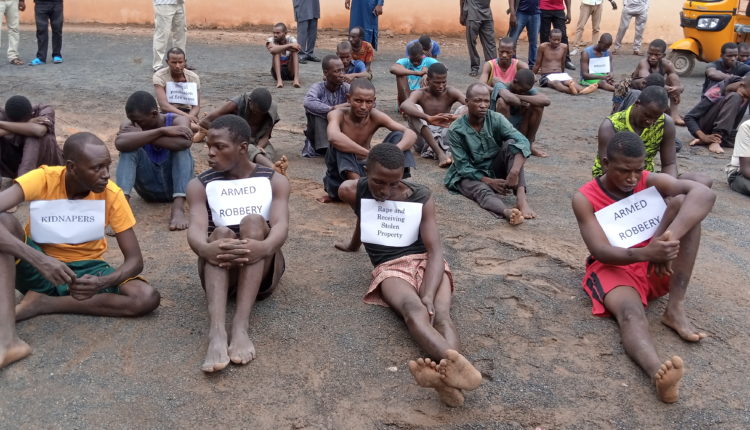 The Police Command in Adamawa has paraded 33 kidnappers and 10 robbery suspects, as well as 16 others allegedly involved in inciting communal conflict in the state.

Mr Olugbenga Adeyanju, Commissioner of Police in Adamawa, confirmed the development while parading the suspects on Monday in Yola.

Adeyanju said that the arrests were made from the July 1, to date, as a result of relentless efforts of police personnel.

“The achievement was recorded as the result of relentless efforts by the Command’s gallant officers with much support from professional hunters, Government and good people of the state.

ALSO READ: Indian hemp sellers, buyers in ‘free for all’ in Ilorin

The Commissioner stated that the suspects were apprehended in Fufore, Maiha, Gombi, Mubi  North and Yola North LGAs of the state.

He said that the 16 arrested for allegedly inciting communal clashes were apprehended with dangerous weapons in connection with the recent crisis between Lunguda and Waja tribes in Guyuk and Lamurde LGAs.

On the miscreants locally known as Shila boys terrorising residents, Adeyanju said some of them had been apprehended.

“The suspects were residents of Toungo LGA; the Command operatives attached to Ganye Division apprehended the suspects.”

War Against Corruption At Crossroads – Presidency

The Presidency, on Sunday, affirmed that the present administration’s war against corruption is at crossroads, saying that Nigerians must join hands to roll it back on course… Read Full Story