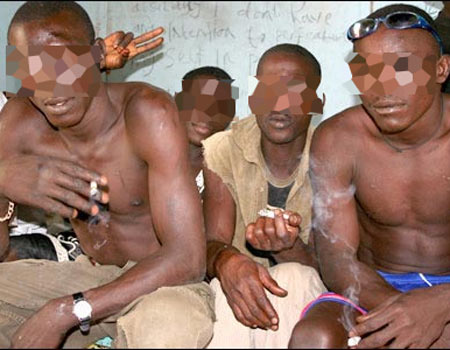 Kwara state police command has arrested one person after a free for all among sellers and buyers of Indian hemp in Ilorin.

Tribune Online gathered that the two groups of suspected miscreants had engaged in a public disturbance last Tuesday over a disagreement on the cannabis Sativa.

However, the state police command, through the Police Public Relations Officer (PPRO), Ajayi Okasanmi, has said that the violence was not over alleged increase in the cost of marijuana as speculated in some quarters, describing such report as misleading.

“To set the record straight, on  Tuesday, 14/07/2020, at about 1900hr, information received by the DPO indicated that youths of Oloje and Alore areas of Ilorin were engaging in a free for all fight at Oloje Junction. The DPO acted promptly by drafting a police patrol team to the area. The arrival of the police team brought the situation under control.

“Investigation, however, revealed that fracas broke out when one Soliu Esho ‘m’ of Alore in Ilorin, a hemp smoker went to Oloje to buy N200 Marijuana and demanded an extra wrap free which the seller refused. The buyer insisted on the free wrap but the seller maintained his ground. The ensuing argument led to a fight between the two. The fight, however, became free for all when friends of both parties joined in the fight. The arrival of the police team drafted to the scene however brought total calm to the area. The youths on sighting the police patrol vehicle took to their heels, fleeing the scene in different directions.

“One suspect was however arrested with bruises. He was treated at the police clinic and charged to court the following day. He is presently on remand while efforts are still ongoing to apprehend others who are still at large, including the buyer and the seller.

In the spirit of Community Policing, Kwara State Police Command under the watch of CP Kayode Egbetokun wishes to appeal to members of the public to always give credible information to the police. He assures that such information will be treated in utmost confidentiality and the protection of such informants given utmost priority. The Command is in collaboration with Nigeria Drug Law Enforcement Agency(NDLEA) and other security agencies, working assiduously to rid the state of sales and consumptions of illicit drugs.

Members of the press are also advised to always verify stories from appropriate quarters before going public as they are partners in the  Community Policing model of the Inspector General of Police as approved by the Federal Government of Nigeria.

The present Community Policing initiative is targeted at ensuring a safe and secured Nigerian community of which Kwara state is part. All stakeholders are therefore advised to embrace this laudable initiative which is designed to change our policing narrative for the good of our communities in Kwara state and in Nigeria as a whole, please.