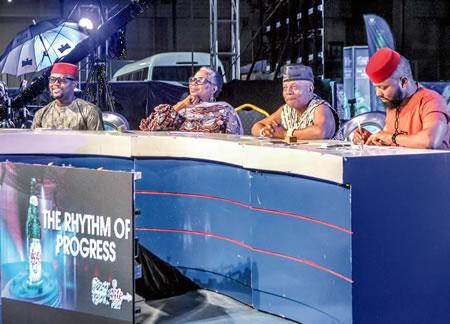 All four finalists brought their A-game as they attempted to stake their claim on the grand prize.  Frank Onyeka, Chimaroke Chimex, Chijioke Charles, and Umunnukwe Nwanja are some of the most talented budding highlife talents in Nigeria and it was a stunning showpiece, watching these guys strut their stuff in a bid to be crowned champions on the night.

The night was full of sensational performances by the contestants as well as the guest artistes which included veteran singer, Onyeka Onwenu, the Limpopo master, Kcee and indigenous rapper and brand ambassador, Phyno.

These superstars were not the only artistes to grace the stage, as the previous winners of Hi-Life fest took the stage to delight the guests in attendance. Chibest David and Dons Ifeanyi provided the perfect precedent for the night, as their performances reminded all in attendance of the immense talent of these young Highlife talents.

Kicking off the guest performances on the night was Kcee. The electric singer showed just why he is a fan favorite in the East, with some impeccable stagecraft and impressive dance moves.

Following up his performance was veteran singer, Onyeka Onwenu. Onyeka once again proved her legendary status with a performance which was full of zest and some sultry singing. It was truly a sight to behold.

Wrapping up the night was Phyno. The multi-talented rapper rounded off the night with a track-list of all his chart-topping singles. His performance was practically a sing-along with the fans, as both he and the guests in attendance both had the time of their lives during his powerful performances.

While all the side-attractions were quite remarkable, the night belonged to the winners in both the dance and music category. Ofu Obi dance troupe walked home with 2 million Naira, while  Chijioke Charles earned the mouth-watering sum of five million naira. It’s hard to imagine a more exciting conclusion to the 2019 edition of Hi-Life Fest, and it will be exciting to see how the talents which have emerged from this platform continue to further their craft and become bonafide stars.