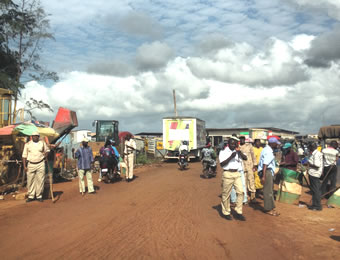 Disclosing this to the Tribune Online exclusively on Wednesday, the former Chairman of the Association of Nigerian Licensed Customs Agents (ANLCA) at Seme border, Mr. Lasisi Fanu stated that there was no movement in and out of the Seme border when the joint security officials arrived the border on Wednesday.

According to Lasisi Fanu: “For now, there is no thoroughfare at the Seme border. I couldn’t even drive-in. I was asked to park my vehicle somewhere because of the heavy presence of security operatives at the border. There is no movement in or out of Seme border today. We understand the situation is the same at all other border points. We just hope things will get relaxed maybe tomorrow.”

In his words: “In the morning of Wednesday, we heard that people were not being allowed in and out of the borders, so we quickly called our people to correct that aspect of the joint military exercise.

“The exercise is not meant to debar people from moving freely in and out of the borders as long as they have legitimate reasons to be there. That was in the morning of Wednesday.

“So I don’t know where people are getting such information from. Maybe some people with ulterior motives suddenly became intimidated by the heavy security presence at the borders. We are not stopping movement in and out of the borders, as long as such movements are legitimate.”

It will be recalled that the Federal Government, on Tuesday, had announced the commencement of a joint border security exercise, codenamed “EX-SWIFT RESPONSE” at the nation’s borders.

The joint exercise is being coordinated by the Office of the National Security Adviser (ONSA) and will take place in 4 geopolitical zones, namely; South-South, South-West, North-Central and North-West.

It is expected that the exercise will promote interagency cooperation and increase preparedness to address trans-border security challenges such as terrorism, armed banditry, smuggling, the proliferation of small arms and light weapons, amongst others.

The exercise will also involve the movement of personnel, vehicles and equipment within the affected parts of the country.

The government had called on members of the public not to panic and should continue to engage in their normal duties.

The overall objective is to ensure a peaceful and secure country in the interest of our National Security.