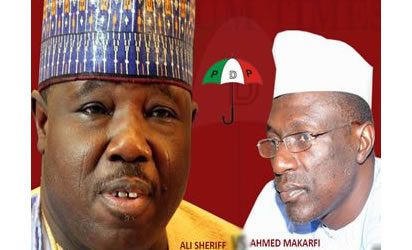 The leadership of the Peoples’ Democratic Party (PDP) led by Senator Ali Modu-Sheriff has given reasons why the Supreme Court cannot hear an appeal before it by the National Caretaker Committee of the party led by Senator Ahmed Mohammed Makarfi.

The PDP’s National Executive Committee (NEC) led by Ali Modu Sheriff (as Chairman), Prof. Wale Oladipo (as Secretary) said the Makarfi Committee, having been declared illegal by the February 17, 2017 judgment of the Court of Appeal, Port Harcourt Division, lacked the powers to take decisions for the party, including initiating court proceedings in its name.

The PDP leadership stressed this position in a written argument it made in support of an application it filed on March 21, 2017, where-in it is seeking the striking out of the appeal filed on February 27, 2017 by the Markafi Committee against the February 17, Appeal Court’s judgment. The written submission was filed on May 10, 2017 in compliance with the directives of the Suoreme Court.

The PDP leadership is contending that the Makarfi Committee did not obtain the necessary authorisation of the PDP to appeal in its name and on its behalf, because the PDP, under the current leadership, was comfortable with the Appeal Court judgment and did not intent to challenge it.

It further contented, in the address written by a group of lawyers led by Lateef Fagbemi (SAN), that since the Court of Appeal, in its February 17 judgment, declared that Sheriff-led NEC as the authentic leadership organ of the PDP, the Makarfi-led Committee could no longer pursue an appeal in the name of the party.

The Sheriff-led PDP leadership argued that the decision of the Makarfi committee to file an appeal in the name of the PDP without its (the party’s) authorisation was not only illegal, it violated the party’s constitution.

Relying on the provisions of Chapter 5, Articles 35(1), 36(1) and 42(1) of the PDP constitution, it argued that the party, with a corporate personality, could only act through the principal national officer, whose powers and functions are stated in the constitution.

It referred to a May 18, 2016 judgment of the High Court of the Federal Capital territory (FCT) in suit No: FCT/HC/CV/1443/2016, ordering a return to status quo as at May 18, 2016 and the subsequent judgment of the Federal High Court in suit No: FHC/ABJ/CS/464/2016, to the effect that only the Sheriff NEC could instruct lawyers for the party, and urged the Supreme Court not to hear the appeal.

The Sheriff-led PDP leadership noted that it has not by its argument said the Makarfi Committee cannot appeal the May 17 judgment of the Appeal Court, having been parties in the case from the trial court, it (the Makarfi Committee) or its members could only appeal as interested parties after first, obtaining the court’s leave to so appeal.

In the substantive appeal, among other issues, it is the contention of the Sheriff/PDP lawyers that the appeal should either be dismissed or struck out because the supposed appellants (Makarfi’s PDP) did not ‎obtain neither the leave of the Court of Appeal nor that of the Supreme Court before filing the appeal which is based on mixed law and facts.

In a counter argument, the Makarfi Committee, represented by a group of lawyers led by Wole Olanipekun (SAN), wants the court to discountenance the Sheriff NEC’s arguments and proceed to hear its appeal, in which it among others, urged the Supreme Court to set aside the Appeal Court judgment of February 17.

In its reply argument dated May 15, 2017, the Makarfi Committee queried the legitimacy of the application filed by the Sheriff-led NEC and argued that it was not only strange, but intended to frustrate the hearing of the main appeal.

It argued that it was wrong for Sheriff and others, who had briefed Akin Olujinmi (SAN) to represent them in the substantive appeal and had filed a respondents’ brief, in which they also made similar arguments in relation to the competence of the appeal, cannot again, brief Fagbemi to ask the court not to hear the appeal but to strike it out.

Relying on Order 8 Rule 6 (1), (2) and (4) of the Supreme Court’s Rules, the Makarfi Committee faulted the March 15, 2017 letter of the Sheriff-led NEC applying to withdraw the appeal and the subsequent application for its strike out. It argued that since the appeal was not filed by Sheriff and others, they lacked the right to apply to withdraw it.

In a response on point of law, filed by Fagbemi on May 18, the Sheriff-led NEC faulted all legal arguments by the Makarfi Committee, urged the court to discountenance its contention and hold that it lacked the locus standi to file an appeal in the name of the PDP, having been sacked by a subsisting judgment.

On the issue of representation, they explained that while Fagbemi and others are representing the‎ PDP as a party, Olujinmi is leading a team for Sheriff and Oladipo, sued in their personal capacities and representing the National officers, NWC and NEC of the PDP.

The Makarfi Committee has, however filed processes, seeking to regularise their processes. But, this was done after parties had joined issues and briefs exchanged.

Meanwhile it was learnt over the weekend that the Supreme Court has rescheduled the hearing of the appeal relating to the PDP leadership dispute for today (May 22).

The court had, on the last date, May 4, 2017 ordered the filing of the written briefs and adjourned to May 25 for hearing. It could not be ascertained the reason for the court’s decision to bring the date forward.