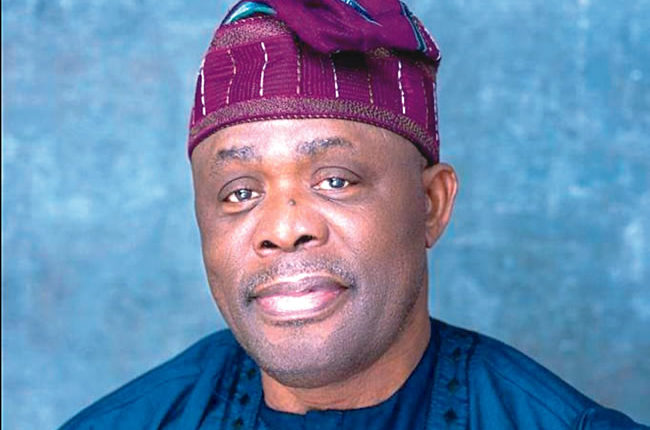 Ahead of the Peoples Democratic Party (PDP) convention slated for this weekend, a contestant to the position of Publicity Secretary, Dr Eddy Olafeso, on Monday said the process was aimed at disenfranchising some contestants for various positions in the party.

Olafeso denied dragging the party to court to stop the convention but to make sure the suspended Chairman, Uche Secondus completes his tenure, maintaining that he would not appeal the verdict of the committee.

Olafeso said he might not participate in the forthcoming National Convention of the party because of the injustice melted on him and other contestants that were disqualified from contesting.

Olafeso, in a statement signed by him and made available to reporters in Akure, said the Screening Committee was manipulated by some individuals in the party to arrive at a predetermined position.

The former National Vice Chairman of PDP in the Southwest geopolitical zone said the petition which the Committee relied on to disqualify him and others was written by a faceless individual.

In his defence, Olafeso said the Suit at the Federal High Court in Lagos was not instituted to stop the National Convention of the Party, but a courageous action taken by some committed stakeholders from the Southwest Zone of the Party to ensure Constitutionality and cohesion within the Party through strict compliance to the extant provision of the Party’s Constitution.

He said “those of us who went to court were conscious of the fact that things were happening within the party that seems to portend imminent danger to the Party if not immediately checked. Hence the approach to the Federal High Court in the hope that the slide into unconstitutionality was stopped and supremacy of the Party Constitution enthroned.

“The crux of the matter is that we asked the court to restore Prince Uche Secondus to his position to enable him to complete his tenure in line with the Party’s constitution to avoid legal quagmire which his removal by Exparte injunction may visit upon the Party. We still stand by this position. My accusers never took their time to read the facts of the case before their conclusions.”

Olafeso who said he has served the Party in various capacities with passion and talents would not do anything to undermine the success of the party congress.

According to him, there is a Constitutional provision of appealing travesty of Justice unheard of in Law done to him, but however, said he would not attend the Appeal Screening Committee.

His words “I am withdrawing from this process henceforth. The process has been calibrated for no reason other than to exclude us and the best we can do at this juncture is to wish the Party well and pray to God for the PDP to survive these perilous times.

“I wish to thank the Peoples Democratic Party Senate Caucus for their support and endorsement. I am humbled by their kind words and encouragement, May God continues to bless you all.

“Also all our leaders routing for me across the country who believed in our capacity to serve, I thank you all. In my home state of Ondo, I thank all the leaders, Local Government Chairmen, members of the State Executive Committee, and all our teaming followers across the three Senatorial districts. I say thank you and may the Mercy of God continue to be with you all.

” Let me correct an impression credited to one of our leaders on National Television that those of us not cleared want to eat our cake and have it. How wrong can he ever be? Some of us baked the cake for you and now you are having it, it is only God’s power that endures forever, talking down on people is not a sign of great leadership. For some of us, this too shall pass and the Peoples Democratic Party shall rise again.

“My loyalty remains with this great party I have come to love and served, if given the chance I will do it over and over again. Long live the Peoples Democratic Party Long live the Federal Republic of Nigeria.”

Olafeso was disqualified by the Governor Umar Fintiri led Screening Committee with the former Secretary of the party, Prof Wale Oladipipo, and one other contestant for allegedly dragging the party to court in order to stop the National Convention.