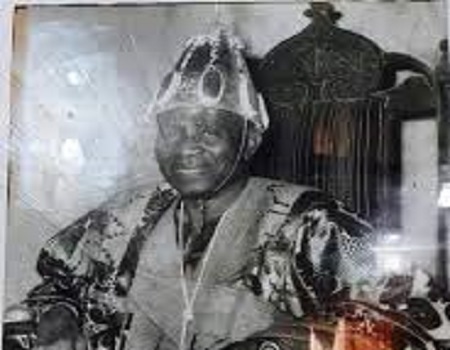 It was 1971 shortly after the Nigerian civil war. It was early in the year because the harmattan haze was still out. In those days, my mother would take us on holidays to Ede, her hometown, from Abeokuta where we lived at the time. She was teaching at the Baptist Teachers College, Idi-Aba. I am full of sweet memories of life inside the staff quarters opposite the school itself. I remember her beloved late brother, Uncle Ademola Laoye, a veterinary doctor, who would often visit and drive us in the company of our cousins to their home base in Igbo-Ora.

In those days, things were different and life wasn’t as chaotic. It was usually serene inside the quarters. The sprawling undulating landscape with lush green lawns was our playing fields, the luxuriant gardens and a row of bungalows like orchestra arrayed on a hill. During holidays in Ede, as a kid with my older sister, Debola, I remember faintly how we played with our cousins, just playing and making a lot of noise in the palace courtyard and inside Baba Timi’s living room. Whenever he was around, he would walk joyfully past us across the living room adjoining his study. I had once peeped into the study which doubled as his library and saw him majestically rocking his chair whilst holding the newspaper to his chest with his head rested on the chair-head. Through the study’s window, I could see two sturdy horses in the stable outside.

This particular occasion has remained my most memorable time with grandpa, the great cultural icon the world knew as Oba Dr John Adetoyese Laoye 1, Timi of Ede (1899-1975), the first citizen of the ancient town of Ede; scion of the fearless famed warrior famous for his ‘flaming arrow’; the venerable drummer king, whose mastery of the talking drum was simply iconic. He was the first educated Timi and one of the very few among Yoruba monarchs of his time; indeed, an intellectual king who promoted Yoruba culture and brought prestige and charisma to the talking-drum as an art-form, an emblem of the historical and political setting of his kingship, which spanned twenty-nine years and three eras in Nigeria’s political history; colonial, post-independence and military.

As an older kid, I later read how he was invited by Queen Elizabeth of England to play the talking drum and was honoured with a member of the Order of British Empire, and whose fame spread wide as he traversed statehouses, museums, royal courts and cultural ceremonies all over the world. Combined with his royal throne, he was one of the greatest cultural ambassadors of his time. Only years later would I truly appreciate the uniqueness of my royal lineage to him as my biological grandfather whose first daughter was my own biological mother, who herself was married to a prince of the Ogboru Ruling House of Ile-Ife in those days?

I was about five years old on this memorable visit. From my recollection of the palace in Ede, there were usually lots of beating of drums in spirited praises of the king, the chief host of the palace, to herald important visitors and the grandeur of his presence. This particular evening of our holiday, I recall my sister and I were nestled by our grandmother in her room inside the sprawling Olori’s quarters, our gentle grandmother, Olori Esther, whose velvet voice could never pierce the wind. We would stay in her company and help with things as little as folding different pieces of clothes she sold. Baba Timi as we fondly called him, had sent for us to join him at dinner. One of the palace messengers came to fetch us and took us through the backyard to Baba Timi’s court which housed the long dining adjoining the main living room where he often hosted visitors. I still have a mental image of the setting of Baba Timi’s inner chambers. Beside the dining table was the piano, a big-size oak-brown piano sitting uprightly in a corner of the expansive living room, overlooking a cluster of chandeliers hanging from the ceiling across the hallway. The living room was long and magnificently decorated with lots of cushion seats, artworks, handicrafts, portraits and framed pictures of Baba Timi with important personalities on different occasions in different countries.

As the messenger opened the back door, Baba Timi enveloped us in his warm arms and ushered us straight to the dinner table where dinner was served. He sat at the head of the table while my sister and I sat on his opposite side. It was a dinner of eko and efo riro garnished with prawns and smoked fish. eko and efo are samples of Ede’s traditional delicacies. Typically, eko is eaten with Okro soup. I recall that apart from eating, the dinner was animated by instructions from Baba Timi about table manners and my awkward use of cutlery. After dinner, he took both of us to the piano and asked us to play for him. My sister went first. She ran her fingers through the keyboard. I followed excitedly. Baba Timi adjudged my sister a better player. I protested that I was better. He smiled and gently pulled me close to himself with a pacifying tone of sarcasm of a grandfather over his precocious little grandson who wanted to be praised. ‘Don’t worry little boy, you are just great’ he remarked, gently robbing my small head with one of his hands and the other on my shoulders. He said it was our turn to watch him play. He positioned himself expertly on the piano stool, looking at us lovingly and played away like a maestro. I don’t remember what tune he played that night but it was the most beautiful harmonics I ever listened to coming out of a piano. He played with us for a while asking us to sing any song we liked whilst he played the tune along. He would swing his head back and forth like a music instructor and smile intermittently, sometimes correcting our lyrics. It was the most exhilarating experience. Finally, he announced it was time for us to go to bed, prayed for us and we all chorused the memorised benediction, the grace. He hugged us and bade us good night. He pressed a bell on top of a wooden cabinet next to the piano, the messenger walked in to lead us back to our grandmothers’ quarters via the backyard lawn.

We later returned to Abeokuta, back in our quarters. That encounter had stuck in the inner recesses of my memory ever since. My mother had spent most of her early years first as a student at the Baptist Missions and returned to teach there after further studies in the UK. She told us how her father took her to Baptist Mission as a little girl. Quite a number of her siblings, the Laoye’s, also schooled in Abeokuta those days. I have sweet memories of my Baptist upbringing and the life of the community we shared inside the quarters.  I particularly remember Dr Trully, Ms Brooks, Ms Ewen, Ms Mccoulough, Ms Perry, all American missionaries who came to the house regularly to pick us to church, birthday parties, games, choir rehearsals and to school. I remember it was a fairly regimented life of routines and instructions. Each time we heard the huge bell ring, the walk to the chapel from a distance was literally a steep rise to meet the misty sky that hid the chapel ahead. Fond memories of my early years inside the mission’s quarters with my mother and only two of us then, my sister and I, before my father joined us. It was afterwards that my two younger brothers, Ayoade and Babatunde, arrived this world.

Baba Timi passed on four years after that eventful dinner with him. We had already moved to Lagos. I remember one time he visited us while he was on a Lagos tour. The whole street was shut down like a festival was going on with his entourage and the huge crowd which gathered to get a glimpse of the king in town. I faintly recalled the front page of Daily Times of that fateful day in July 1975 ‘Timi of Ede is dead’ or something like that. In Yoruba folklore, Kabiyesi never dies. He only hibernates inside the roof. The memory of that dinner with Baba Timi has left an indelible mark on my childhood and one experience with the legend, my grandfather, which I would cherish forever. Little did I know that the following year after his demise, I would be ensconced far away from Lagos as a fresh form one student in the same Ede at Timi Agbale Grammar School, where I would spend the next five years of my life in the boarding house. Forty-five years on, the legacy lives on!

Magu Cries Out Over Fair Hearing, Lawyer Writes Salami Panel
SUSPENDED acting chairman of the Economic and Financial Crimes Commission (EFCC), Mr Ibrahim Magu, has told the Ayo Salami-led Judicial Commission of Inquiry that his rights to a fair hearing are being violated. This is contained in a letter written by Magu’s lawyer, Mr Wahab Shittu, dated August 11, and addressed … Dinner with Oba Adetoyese Laoye

FG To Deduct Money From States Over Double Taxation
THE Federal Government is set to sanction states engaging in double taxation in the country, as the Federal Executive Council (FEC) has asked the Minister of Finance, Budget and National Planning, Hajia Zainab Ahmed, to deduct money from the source from those states… Dinner with Oba Adetoyese Laoye

Insecurity: NGF Calls For Investigation Into Obadiah Mailafia’s Allegation
The Northern Governors Forum (NGF) has called on security agencies to investigate the allegation by a former Deputy Governor of the Central Bank of Nigeria, Dr Obadiah Mailafia, that “…one of the Northern governors is the commander of Boko Haram in… Dinner with Oba Adetoyese Laoye

FG Set To Pay N22.6 Billion Final Entitlement Of Ex-Airways Workers
THE former workers of the defunct national carrier, Nigeria Airways, may soon have cause to smile as indications have just emerged that efforts are on top gear to ensure the payment of the final batch of their benefits. Information flittered out early in the week of the ongoing move by the Federal Government to offset… Dinner with Oba Adetoyese Laoye

UNILAG Council Appoints Omololu Soyombo As Acting VC
With the removal of Prof Oluwatoyin Ogundipe as Vice-Chancellor, University of Lagos, the governing council has appointed Prof Omololu Soyombo as acting vice-chancellor. Registrar of UNILAG, Oladejo Azeez, in a statement also confirmed that Ogundipe was lawfully removed as vice-chancellor at an emergency meeting… Dinner with Oba Adetoyese Laoye

Re: Noose tightens around service chiefs

Consequences of politics in the workplace

General Buratai and his strategic ministration to Nigeria