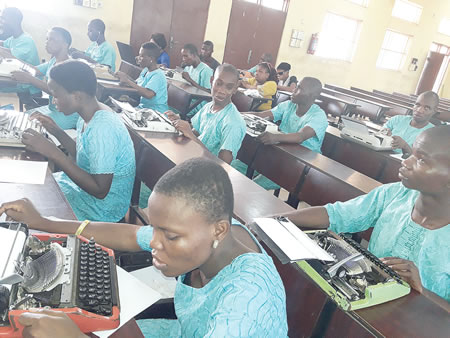 Some of the blind candidates who sat for the just-concluded 2020 Unified Tertiary Matriculation Examination (UTME) have expressed their satisfaction with the way the examination was conducted for them.

They said except for the sudden change in dates and the need for them to rush to the venues so as to meet up with the new scheduled times, the exercise was peaceful and free of technical hitches.

A total of 354 of blind candidates took part in the examination at 12 designated centres nationwide, with four centres in Kano covering all the northern states having the highest number (122), followed by Enugu covering Abia, Anambra, Enugu, Imo, Edo, Delta, Rivers, Bayelsa and Abia (55).

This year’s examination (for blind candidates) was earlier slated for Monday and Tuesday but was rescheduled for Saturday and Sunday because of the Corona virus pandemic in the country.

Tribune Education monitored the exercise at the University of Lagos (UNILAG), Akoka, which served as a centre for both Lagos and Ogun states, where the chairman of the Equal Opportunity Group and former executive secretary, National Universities Commission (NUC), Professor Peter Okebukola, and some members of the group directly supervised the exercise.

Mr. Sodiq Alalade from Ayetoro-Yewa, Ogun State, for example, had his examination at the centre. He said though, the time alloted to each subject was not enough, he believed he did well in the examination and would certainly obtain enough marks to secure admission to UNILAG.

Another candidate, Zainab Adebambo, also at the centre, said she came to the venue with determination to pass and secure admission to Olabisi Onabanjo University (OOU), Ago-Iwoye, Ogun State.

Commenting on the exercise, the chairman of the Equal Opportunity Group, Professor Okebukola, noted that the group was a creation of the Joint Admissions and Matriculation Board in 2017 and consists of senior lecturers, including experts in special education.

He said the blind candidates, like others, were assessed in a total of 19 subjects, including Use of English and Mathematics, as applicable to their proposed courses of study, and they were also allowed to make use of instruments as convenient, including Braille and typewriter, to write their examination.

According to him, JAMB is responsible for the transportation of candidates and their guides to and from the examination centres, hotel accommodation for those who could not go home on the day of their examination as well as feeding.

Okebukola said a total of 175 out of the 390 candidates who sat the examination last year (representing 44.8 per cent) are now in universities.