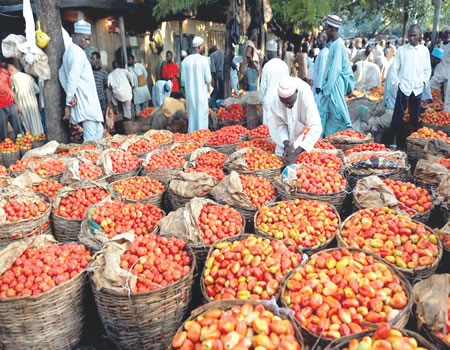 SELECTED tomato and Pepper Growers in Osun State have been empowered with a total of N2.2 million to begin the production of the two essential commodities in the state.

The farmers numbering 14, were given the funds by the government, through the Osun Micro Credit Agency, to aid food security measures.

Giving out the cheque on behalf of the State Governor, Gboyega Oyetola, Manager of the agency, Prince Dayo Babaranti, said the gesture was targeted at empowering the youths to be self-reliant and curbing the spate of unemployment in the country.

He said that no fewer than 26,000 people have benefited from the loans, having inspected their farmlands and certified their impressive performances in tomato production.

The initiative, which he revealed was in three phases, would also affect other farmers in various agricultural value chains, as millions were set aside for the course.

He urged the beneficiaries to make judicious use of the money and ensure its repayment on or before the stipulated time.

One of the beneficiaries of the event, Mr. Lawal Omotunde, who also doubles as the Chairman, Tomato and Pepper Growers Association of Nigeria, Osun State chapter, expressed gratitude to the state government for the intervention, in boosting the state economy through agriculture.

The chairman who bemoaned the difficulty in financing their businesses added that with the government’s initiative, farmers’ agribusinesses would become more profitable, and in no small measure yield positive results.