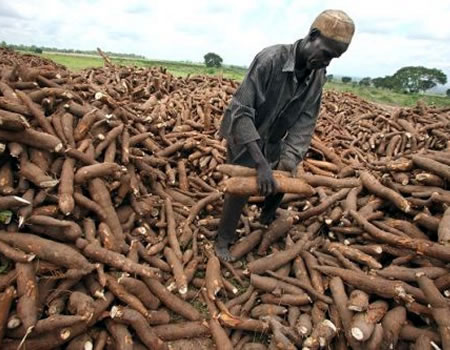 2,403 Cassava production farmers have been credited with a sum of N210,273,00k each as credit under the Ogun State Anchor Borrowers Programme across the 20 local government areas of the state.

The State Commissioner for Agriculture, Dr. Adeola Odedina, said the beneficiaries are the first batch of the programme.

The commissioner described the development as unprecedented, submitting that the part of the programme’s resolve is to link registered farmers to credit, land, inputs, technology and assured market

He said the initiative had created a minimum of 2,403 jobs as part of the state agric vision of agricultural industrialisation, food security and job creation.

Odedina urged other registered farmers who are yet to be linked to credit under the Programme,  to follow and regard updates only from the State Ministry of Agriculture.

The commissioner added that work is already in progress for applicants who claimed to have lands which had been verified by the Central Bank of Nigeria (CBN) with physical and digital geotagging.

Meanwhile, the second phase of the State Broiler project has commenced with an expectation by the beneficiaries of making a profit margin of N170,000 to N200,000 in the next six weeks of production.

Nigerian Tribune recalled that 54 beneficiaries participated in the first phase of the programme, whereby each of them were provided with 1,000 birds each.

Odedina made this known during an inspection tour to Eweje Farm Institute in Odeda Local Government Area of the state.

According to the commissioner, the farmers in the first phase of the project made an average of N130,000 each within few weeks of production.

He said, “We have been very successful in the first phase of this project. We raised young farmers with 54,000 birds and they made an average of N130,000 each within six weeks of production.

“ In the second round of production, average of N170,000 to N200,000 is being projected per beneficiary based on their experience.

“It is worthy of note that we have been very successful in raising young people as pilot in stimulating the interest of other youths in agriculture.”