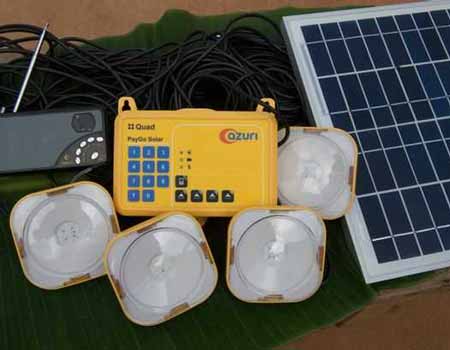 ACTING President, Professor Yemi Osinbajo on Tuesday, launched the Paygo solar homes system for 20,000 households in the rural areas in the country.

The Solar Home System is built to deliver affordable, clean energy to 20,000 rural households who are off the grid.

Speaking at the launch organised by the Niger Delta Power Holdings Company (NDPHC), ‎at Wuna village, Gwagwalada Area council, Abuja, Osinbajo said the present administration was committed to providing electricity to rural areas, who are not connected to the grid.

The project, he said, was in line with the government’s renewable energy policy to increase energy production from renewable sources.

He explained that although, the project which is handled by Azuri technologies is targeted at 20,000 households, this would soon be replicated in all States across the country.

He said: “In November 2015, the President [Muhammadu Buhari] spoke with me about what we could do to very quickly accelerate electricity supply especially in the rural areas.”

“We had in mind all manners of different projects that we could do to bring electricity to many of our communities. We expect that this will be replicated all over Nigeria, we are starting with 20,000 but I am sure we will ramp up very quickly.”

“We’ve been talking to the Private sector about involving themselves in this project. We think that as solar power becomes practically cheaper on daily basis. We will be able to afford to do even more, to deploy more across the country especially in those places that are not at the moment served by our grid.”

Osinbajo further stated that: “We will be putting more pressure on Azuri technologies to begin local assembling of this solar equipment, we think that we have the capacity to do it, to do whatever it takes to manufacture the technology here.”

Earlier, the Executive Director, Azuri, Simon Bransfield-Garth stated that the Solar system, when installed, have the capacity to power four LED bulbs which provides up to 8 hours of lighting as well as a radio and a USB port with charging cables for mobile phones.

He explained that beneficiaries are expected to pay top-up rate on monthly basis via mobile money for a period of 36 months after which the unit can be unlocked permanently for customers.

The Executive Director also added that the deployment of 20,000 Azuri solar home system is expected to create 500 direct jobs and 5,000 indirect jobs.

“Small businesses will be able to stay open for longer hours after sunset, students can continue their studies in the evening and off grid families can charge phones or listen to radios in their own homes,” he said.

20,000MWs of power will be sufficient for Nigeria’s industrial, residential use…