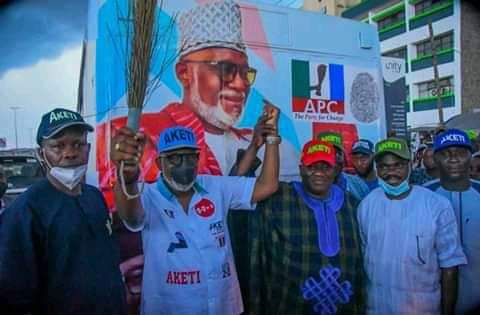 The struggle for the seat of power in Ondo State witnessed a new twist on Monday, as the candidate of the Social Democratic Party (SDP), Mr. Peter Fasua, stepped down from the race for October 10th governorship poll for Governor, Oluwarotimi Akeredolu, SAN, saying “I share the same vision with Akeredolu”.

Also, the SDP member representing Idanre/Ifedore Federal Constituency in the House of Representatives, Honourable Tajudeen Adefisoye, endorsed Akeredolu for reelection, saying “he has assured me that he would develop Idanre.”

Fasua, a native of Akure, said” “I am stepping aside from the race because my vision and that of our party is identical with the vision of Governor Rotimi Akeredolu.

“When I listened to the governor during our debate on Sunday, I realised that most of my vision for the state was already expressed and initiated by Governor Akeredolu. He has done well. I am joining his train so that I can be part of the positive history the governor is creating.

“So, we are collapsing our structure, offices, and everything at our disposal together to ensure that the plans to industrialise our state becomes a reality.”

The SDP candidate also donated his campaign office and buses to the Akeredolu’s campaign organisation.

Also, Adefisoye, who addressed his supporters in Idanre on Monday, said “after consulting very widely with the leaders of SDP and other important leaders within and outside Ondo State, I have decided to support the APC. But I want to assure that this decision was primarily taken for the sake of continuous development in Idanre/Ifedore federal constituency.

“We must realise that politics is all about interests and should not be played with emotions. Now that your leader has declared support for Akeredolu, we should agree with this decision and work for the victory of Akeredolu. This election is going to be operation win your units.”

Responding, Akeredolu thanked Fasua and SDP for placing the interest of the state above their personal interests, promising never to betray their trust in him.

“Be rest assured that I will not disappoint you. My administration shall continue to deliver for the people. I will never derail,.” the governor said.