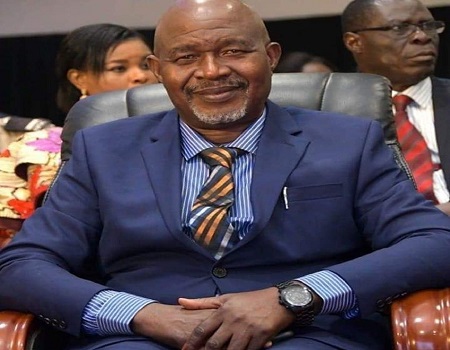 The former Secretary to the Ondo State Government (SSG) Hon. Ifedayo Abegunde who resigned from the governor Rotimi Akeredolu cabinet at the wake of the primary of the All Progressives Congress (APC) in the state, has returned to the governor’s fold.

Abegunde resigned his appointment in June to support one of the APC governorship aspirant, Segun Abraham, who later stepped down for governor Akeredolu before the primary election of the party.

Abegunde however, switched to another aspirant, Olaide Adelami, who garner four votes and came fifth in the APC primary election, losing the ticket to Akeredolu.

It was gathered that some leaders of the party in the state on Sunday evening led Abegunde to the Alagbaka Government House, to settle with his former principal who received him with an open arms.

The former SSG was said to have pledged his support for the reelection bid of Akeredolu with a pledge to deliver for the party in the October 10 governorship election in the state.

Abegunde will be working with other political gladiators from Akure town to ensure the return of the APC and Akeredolu who will be contesting against Akure son, the Peoples Democratic Party (PDP) candidate in the election, Mr. Eyitayo Jegede.

A party chieftain who was at the meeting disclosed to Nigerian Tribune that apart from Abegunde, a former Commissioner for Special Duties in the state, Femi Adekanbi, also settled his differences with the governor.

The party chieftain affirmed that ”Yes, Abena (Abegunde) was with the governor this evening. They have settled their differences.

“From now on, he will be working with other APC faithful to ensure the victory of the APC and Akeredolu in the forthcoming election”

Abegunde who resigned from the cabinet of Akeredolu but remained in APC cited personal reasons for his exit from the ruling APC government in the state, alleging that he was ill-treatmed during his three years at the office of the SSG.