On the need to remove subsidy 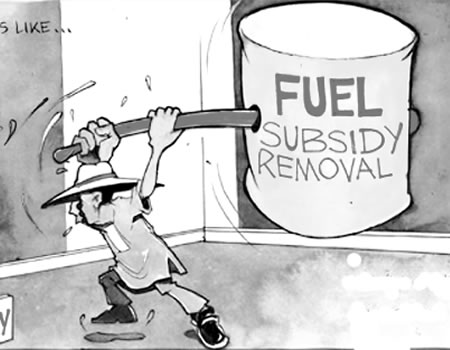 Last Week, Nigerians received a September gift from government. The Pipeline Price Monitoring Company (PPMC), a subsidiary of the Nigerian National Petroleum Corporation increased the price of petrol from N143 to N151 per litre. The Nigeria Electric Regulatory Commission (NERC) simultaneously hiked the electricity tariff. Don’t ask me why the government took this bold, daring but unpopular decision. Even before it finally settled for these actions, indicators had continued to emerge that the days of subsidy would be over.

Why? The government says it cannot afford or continue to dole out handouts to Nigerians in the name of subsidy. It is reported that the government had been spending billions, if not trillions, on subsidy which often ended in the pocket of few marketers. Therefore, the government feels providing subsidy to Nigerians will rob it of enough revenues to carry out infrastructural development.

Amidst the Covid-19 pandemic which seriously affected the country’s economy, one cannot rule out these measures from the government even if Nigerians will not welcome it. Since the announcement of hike in the price of petrol and electricity by the government, there has been outrage, condemnation and mixed reactions. Many Nigerians viewed the development as wrong and untimely. For instance, since the outbreak of coronavirus with its attendant or grave consequences, many Nigerians have lost their means of livelihood.

You will agree with me that this hike in price will have negative multiplier effects on the economy. Other sectors which depend on petroleum and electricity like transportation, manufacturing and small scale business may be forced to increase the prices of their services. Sadly, the pauperized and downtrodden masses would bear the brunt. With the bitter price pill forced into the mouth of Nigerians, one is at a loss to conclude if there is any relief or hope in sight for the country. There is nothing wrong in government stopping the petroleum subsidy through advanced countries of the world still pay subsidy on goods and services.

In the case of Nigeria, it is alleged that the petroleum subsidy has been fraught with corruption and irregularities. It is also believed that deregulation is the only way to unbundle the petroleum sector as it guarantees efficiency and attracts foreign investors. This, of course, is the truth. The poser remains though: why will government punish Nigerians for the sins of few people? In the US and other developed countries where the subsidy is a matter of life and death, nobody hears about shoddy deals because the system has been structured to help many, not the few. This is not the case in Nigeria.

However, it is not debatable to say Nigerians will experience a rise in the cost of living in the coming years. The hike in price has come at a wrong time when international and national agencies like world poverty clock and Nigeria Bureau of Statistics have continued to reel out a shocking figure of poverty in the country.

Politician, Others Offended By My Husband Should Forgive Him ― Adedibu’s Widow
Wife of the late strongman of Oyo State politics Alhaji Lamidi Ariyibi Adedibu, Alhaja Modinat Abosede Adedibu has come out to appeal to those he offended while alive to forgive him, as there is no human being that does not make mistakes. She also added that since he is now late, those who offended him too… remove subsidy  remove subsidy

Kill Me Rather Than Destroy My Cannabis Farm ― Suspect Begs NDLEA In Kogi
A suspected Cannabis Sativa farmer, Clement Akor, has begged the National Drug Law Enforcement Agency (NDLEA) to take his life instead of destroying his 10-hectare cannabis plantation. Akor, a 42 years old father of six children from Enabo village in Ankpa Local Government Area of Kogi State was arrested by the Kogi State command of… remove subsidy  remove subsidy

CAMA Is Against Religious Institutions In Nigeria ―CUPP
The Coalition of United Political Parties (CUPP) on Wednesday said that the Companies and Allied Matters Act (CAMA) was being targeted at religious institutions in the country. Addressing newsmen in Abuja, the spokesman of CUPP, Ikenga Imo Ugochinyere said that it was also a plot by the Federal Government to have access to finance… remove subsidy