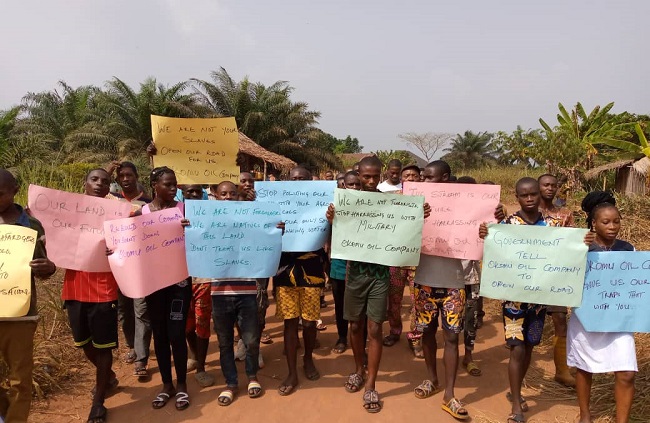 The host communities of Okomu Oil Palm Company Plc in Ovia South-West Local Government Area of Edo State, over the weekend held a peaceful protest against what they tagged marginalisation and ill-treatment and water pollution by the oil palm company.

The protesters, who were drawn from the host communities such as Gbelebu, Safargbo, Okomu, Oweike and Maikolo, carried placards bearing various inscriptions such as “Govt tell Okomu Oil Company to open our road”,  “Okomu Oil Company give us our fishing traps that are with you”; “Stop polluting our stream with your agrochemical, it is our only source of drinking water”; “We are not terrorists, Stop harassing us with military, Okomu Oil,” accused the company of using military personnel to block the only road that links them to Udo.

They also accused the Edo State Government of enslaving them in their ancestral land by selling the whole land where they farm to the company, lamenting that they have nowhere to farm anymore in their land.

Addressing a press conference shortly after the protest, the Fiyewei (spokesperson) of Okomu clan, Chief Ajele Sunday, said it was unfortunate that the state government had joined in the enslavement of the people with continuous sales of the people’s land, leaving little or nothing for the farming communities.

“A country that has a constitution, it is unfortunate that the constitution is not working. A country with laws yet the law is not working. The law protects only the rich while the poor who are the forest people that feed the nation are suffering. Everything we buy in the market comes from the forest,” he lamented.

On her part, Mrs Biobokogha Pena-ere from Okomu said the company had put the communities into bondage through their maltreatment and harassment, lamenting that they could no longer fish nor farm.

“Okumu Oil Palm is oppressing us, intimidating us, we don’t have good road, we don’t have good water. We cannot kill the fish we used to kill before because they have used their chemical to spoil our river, so no fish. The petty business we do to survive, they have blocked the road to access urban cities, so we can no longer do our businesses,” Pena-ere lamented.

“In terms of employment nothing; talking about a scholarship, nothing, everything they promised, nothing was done,” Yabike stressed.

According to him, Okomu land was initially divided into two areas: BC 9 and BC10, with the company occupying BC9 while the natives occupy BC10.

He, however, lamented that Okomu Oil Palm Company had crossed to BC10 part of the land, using the military to intimidate the people.

“We are tired of the activities of Okomu Oil Palm Company. The company has been evacuating our communities. Some times ago, they came with soldiers to evacuate Lemon camp. After that they proceeded to Agbede community politics and evacuated them, and later extended to Oweike, they evacuated it too,” he said.

Also speaking, a chief from Gbelebu community, Ejueyi Segun, said the only road linking the community and others had been blocked by the company, emphasising that the road belongs to the communities and not the company as being claimed.

“The company has locked up the existing road before the company was founded. Since 2019, the road has been under lock and today it been locked. They used COVID-19 as an excuse to finally lock up the road with lockdown excuse. The alternative road is bad,” he said.

“The road the company is claiming is not its road, that road was constructed by British West Africa Timber Contractors of those days before Okomu Oil Palm was set up there,” Ejueyi maintained.

Lawoni Dumofaye, from Agbede community, also corroborated the earlier speakers, adding that “our streams are being polluted with their agrochemicals. We are suffering. We are calling in the international community and the government to come to our aid. We have a lot of graduates in our communities but none is being employed.”

Efforts to reach Fidelis Olise, the Public Relations Officer to the company were abortive as all calls and WhatsApp messages sent to his mobile number were not replied, even after reading them.

CDS, other service chiefs visit Theatre Command, to meet with commanders, others