Okra: Why diabetes patients should be careful 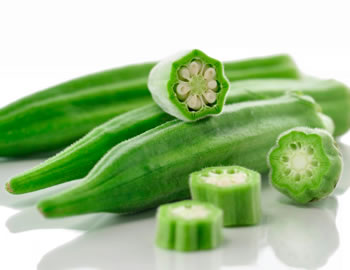 Are you diabetic? Do you enjoy taking okra soup with Eba or fufu? Well, much as we all eat different foods to maintain body processes and keep healthy, but for diabetics, experts are cautioning against taken their diabetic medications immediately after a meal containing okra.

In a study, experts found okra may improve blood sugar control but should not be taken concurrently with metformin hydrochloride a common diabetes drug used in controlling diabetes mellitus.

For the study, the scientists used five groups of rats. The rats of all groups except the normal control group were fasted for 24 hours and fasting blood glucose levels were determined.

Metformin tablets are taken with meals to reduce its strong gastrointestinal side effects like diarrhoea, cramps, nausea, vomiting, and increased flatulence.

The experts assessed whether it is safe to take metformin with meals that contain any source of soluble dietary fibre such as okra under laboratory conditions. As it is taken with meals, there is a chance of metformin interaction with foods altering its effectiveness.

Diabetes mellitus is one of the most common problems challenging the public health in the 21st century. It is a disorder marked by high blood sugar level which occurs when pancreas cannot produce enough of insulin or the body cannot effectively use the produced insulin.

Treatment measures of diabetes include diet control, physical exercise, and use of oral medications for type 2 diabetes only or use of insulin in type 1 Diabetes.

Green fruits of okra are popular all over the world as a vegetable for its nutritional values and health benefits. Okra’s pods are full of nutrients like minerals, vitamins, proteins, carbohydrates, fats, enzymes and large amount of mucilage which contains soluble dietary fibres like pectin and guar gum.

Traditionally, okra has been used as an alternative treatment for diabetes. It is assumed that this effect of okra is due to the presence of large amount of soluble dietary fibres which retard glucose absorption from the gastrointestinal tract.

Recently, the possible interaction of the soluble dietary fibre fraction of okra with oral metformin has been a matter of concern because this vegetable is being widely used by diabetics as an adjunct to the diabetes treatment.

In the study, water-soluble fraction of okra fruits made by soaking sliced okra pods in water for 10 to 15 minutes and collecting its filtrate significantly reduces the absorption of glucose.  The 2011 study was published in the journal, Pharmaceutics.

In addition, they found a strong interaction between water-soluble fraction of okra and metformin which results in nearly complete loss of blood sugar lowering (antihyperglycemic) effect of the drug.

Blood glucose level changed very little in this group of rats from 33.5 to 32.2 mmol/L at four hours. But, in the animals which did not receive water-soluble fraction of okra with metformin, glucose level dropped to 14.9 mmol/L within four hours.

At two hours, the average blood glucose level in the rats that received only glucose was 7.2 mmol/L but when the same amount of glucose was administered with 0.2 mL of WSF in FGF group rats, the level reduced to 4.7 mmol/L.

The researchers suggested that the water-soluble fraction of okra entrapped metformin, thus made it unavailable for absorption.  Also, they said that its high viscosity may also contribute to this effect by inhibiting the diffusion of metformin from the dosing mixtures.

Meanwhile, they said further studies are required to elucidate the effects of other fibre-containing foods on the effect of antidiabetic drugs.

Given that this study was done in experimental rats, to properly interpret these interesting findings, they said more studies would still need to be done using human subjects.

National treasurer, Endocrinology and Metabolism Society of Nigeria, Professor Babatope Kolawole however would not agree that diabetes patients should be careful in taking metformin with a meal that contains okra given that it was an animal study.

Kolawole, a diabetes expert at the Obafemi Awolowo University, Ile-Ife, Osun State, said such factors as the type and dose of metformin used as well as the amount and caloric content of the food item can all affect blood sugar level in a diabetic.

According to the expert, where a slow releasing type of metformin is taken along a diet that contains okra, the effectiveness of metformin will not be affected since it is not released all at the same time.

Although diabetics can eat many food items, he said that they are always cautioned against eating food items that cause a rapid increase in blood sugar levels like soft drinks and high amounts of fruits like bananas.

However, Kolawole said that foods rich in soluble fibre such as okra has been found helpful in maintaining good health given that they cause a gentle rise in blood sugar level, support good bowel movement and help to prevent diseases such as colon cancer.