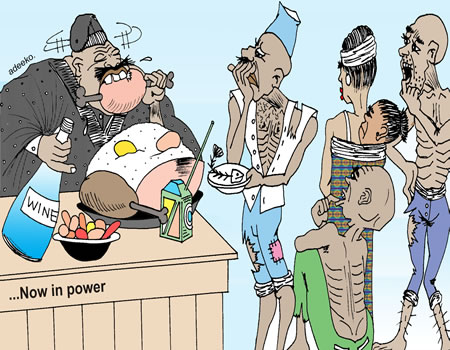 HAVE you ever wondered why most African countries are poor, underdeveloped, unproductive, and pathologically backward and lacking in imagination and creativity? Have you ever wondered why the political following in Africa is so timid, servile, imbecilic, slow footed and gullible? Have you ever wondered why a people could allow themselves to be so fleeced and yet remain complacent and unquestioning? So many things to wonder about in Africa and Africans that you sometime wonder whether we are on the same planet with the Caucasians and Asians. Simply incredible set of human beings. This piece is not necessarily about Nigeria or whether this writer has abandoned his campaign for a return to status quo ante, which is to the geographical space that got fraudulently christened Nigeria by some drunken and mischievous pink-skinned marauders before the fraud of Amalgamation. The piece is not an abandonment of the conviction that Nigeria is not working and not workable. It is much deeper than that.

The piece is set to examine one of the major factors militating against progress and development. The piece is set to examine the fact that those who found themselves in the commanding heights of leadership in Africa, and particularly and peculiarly in Nigeria automatically transform themselves to semi-gods the moment they get power and position. Nigerian officeholders are in the main very arrogant, pompous, and irritatingly proud and disrespectful. Let me hasten to say that there are a few exceptions, the reason I qualify the declaration with the phrase ‘in the main’. The worst culprits are the State Governors and those who occupy the all powerful seat in the country’s capital. You wonder why this is so. But the reason is not far fetched. The office of the governor is not responsible or accountable to anybody. State governors have no respect for all their aides including their commissioners, advisers, consultants and so-called assistants whether  Senior, Special or ordinary.

It is not just because those officials working under the governor are his/her appointees, but more than that, because there is unexplainable timidity and servitude in the character of the Nigerian animal. Because of shortage of almost everything in the land except poverty and prostitutes, any Nigerian that is lucky to be appointed commissioner or adviser believes that his many sleepless nights in the grove of the pastor, imam or babalawo have paid off. He or she is therefore compelled to turn self to an unquestioning stooge in order to keep the position which thousands of others in his or her constituency are waiting in the wings to grab.

At Executive meetings where major decisions about the welfare of constituents are discussed, there is hardly any debate. The governor does all the talking and the Executive members are reduced to laughable rubber stamp. Political parties are used only before elections and during elections. The moment the governor emerges,  the Senator or the House of Representative member emerges, the political party is thrown into the dust bin or at best left on the rack to be dusted up in preparation for another election couple of years down the line. In the days of yore leaders of the NPC, NCNC and the Action Group wielded uncommon powers and control over their elected officials and thus commanded accountability. Nowadays, there is nobody to be accountable to. The electorate have been thoroughly and deliberately paralysed with poverty and they have become voiceless and helpless. Labour unions are in disarray and student unionism has been consumed by huge bribes and cultism. The media still wields some power and influence but because office holders know that the Press can only bark with hardly any teeth in their gums, it is largely ignored.

The judiciary has made a nuisance of itself and has thus lost credibility; it has become a willing tool in the hands of thieving office holders. Churches and Mosques and such other exponents of organised religions have lost focus and they too have been corrupted beyond recognition.  When I was  growing up in the 1940s, 50s and 60s before money-worshipping televangelists roared in with their affectation from the US, religious leaders were treated as next to God

With this scenario, the Office holder sees nobody to moderate his excesses and thus becomes a monster that everybody must fear and worship. There are instances where commissioners and top office holders in their State must not dress in suits or agbadas when their oga, the governor chooses to wear such to the office or for occasions, For the females, they dare not ‘compete’ with Madam First Lady either in dressing or in make up.You may wonder again why even the military governors and other top echelons of the military were accessible and people friendly. The answer is found in the culture of the military which dwells on accountability to their superiors. A military governor knows he can be summarily removed, sanctioned and even disgraced by his Military President or even the General Officer Commanding in his locality. When a Military Governor awards contract for road construction he ensures that at least 70 per cent is spent on the road and the road is seen by every one. This is not the case with a Civilian counterpart who will spend about 30 per cent on the road that is NOT seen, and the 70 per cent that disappears in the pipe! Let me quickly repeat that this characterization does NOT apply to all civilian governors or office holders, but it does apply to the majority amongst whom are nose –in-the-air stiff necked buffoons who play god because they find themselves in positions of power and authority and who believe that they are unaccountable and unanswerable.

Nigeria will not progress with the mind set of office holders who play god and with political appointees who remain ridiculously timid and stupid. I must add that office holders are not limited to political office holders. Top office holders in the banks, in industries, in the universities and polytechnics are not in any way better than their political office holder counterparts. You see some bank chief executives being escorted by up to twenty heavily armed anti-riot policemen even to a social event and you wonder whether such banker is the Inspector general of police! We can understand and excuse uniformed officers being subservient. That is their Command & Obey service culture. But what about deputy governors that are treated like toilet cleaning brush by their governors or bank staff treated as door mats by their chief executives? For Nigeria or indeed any African country to make progress, public office holders must see themselves as mere first among equals and their positions as a call to service, while their supporters and people under them must hold their leaders accountable and removed from the horses on which they have installed themselves.