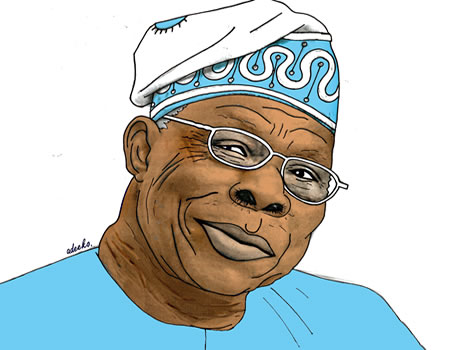 IN his characteristic mien, he craves his desideratum with unceasing sturdiness. And in most cases, he gets them, albeit accidentally, as he once admitted. But his latest devotion is certainly not by accident. Ordinarily, one will want to ask what an 80-year-old wants to do with a doctorate degree. Though few cases of octogenarians enrolling for first degrees abound, however, it is quite rare to find people in that ‘rank’ seeking to be Ph.D holders.  But for Olusegun Mathew Aremu Obasanjo, former military Head of State and civilian president, his latest academic voyage might provide reasons why a ‘grandpa’ will return to school to seek greater depth of knowledge, create new knowledge, discover new things and develop new skills. In about three years from now, the village ‘boy’ whose name cannot be ignored in the country’s developmental history hopefully will add a doctorate degree in Christian Theology to his epaulets.

His life has been a remarkable reference for many. Chief Obasanjo’s place in history cannot be faulted as he has and is still in some cases traversing the military, political, academic and sociocultural courses with finesse and verifiable feats.  Acting President Yemi Osinbajo recently described him as a global citizen. His rise from the military to the civilian corridors of power shows clearly that perhaps destiny and sheer hard work still rank high for success in life endeavours. Since he completed his second tenure as a democratically elected president, Chief Obasanjo has been very busy. It has been one engagement or the other. He has been involved in national and international discourses. He has not shied away from contributing to weighty developmental issues and he seems not stopping soon. No doubt, Chief Obasanjo remains one of Nigeria’s living legends with vast knowledge of governance and development issues.

Amid his engagements, Baba has been involved in controversies. Controversies are not bad entirely as in some cases man needs to be controversial in order to perfect his ideas. As Vanguard newspaper editorial of March 21, 2017 puts it, “Obasanjo is an ebullient public figure who does not run away from controversies, some of which will have wilted the courage of less determined mortals. He has also struck the boisterous posture of an intellectual in his own rights…” Perhaps Chief Obasanjo is adding colour to his posture as a public intellectual by proposing  to address some identified challenges in the North East of the country through rigorous independent academic rituals. Chief Obasanjo presented his research proposal to the Faculty of Arts of the National Open University of Nigeria (NOUN) as part of the requirements for the award of a PhD degree in Christian Theology. Chief Obasanjo had earlier obtained bachelor and master’s degrees from the same institution.

Chief Obasanjo’s proposed topic is particularly interesting: “Resolving the Unfinished Agenda in Liberation Theology: Reflection on Leadership, Poverty and Underdevelopment in North-eastern Nigeria.” While I am not privy to the proposed problem statement, methodologies and significance of the study, I am confident that the research if conducted with utmost rigour and in line with laid-down academic procedures should contribute a lot to the myriads of challenges facing the region.  Whether we admit it or not, the North East is a big burden to the country. The level of devastation and seeming frustration occasioned by the Boko Haram insurgency is better imagined than experienced. The region is in dire need of attention. Dissecting issues of poverty, leadership and underdevelopment becomes most crucial at this time. His study which is expected to provide answers to some pertinent questions relating to the variables in focus should be something to cheer. Chief Obasanjo’s touch of Christian theology in the gaps identified is of particular interest. His contributions to literature as well as recommendations from his final thesis should be able help address the objectives of his study.

This singular voyage by the ex-Head of State has shown that life is about seeking knowledge and making useful impacts. Chief Obasanjo said he enrolled in NOUN to set example and demonstrate the importance of seeking knowledge despite one’s longevity. Clearly, he is helping to rewrite our national narrative. His pursuit of the highest academic qualification in the university shows that there is no end in knowledge. Also nobody no matter the class, status or wealth is too big to learn. In other words, age is no barrier to learning. Additionally, no matter the status in life, one can still subject oneself to the discipline and regiment of student life again. Having attained the highest office in the land, Chief Obasanjo has demonstrated an uncommon disposition. A man that can be said to be ‘made’ already, his class is certainly not a factor here. Certainly, Baba will have to sacrifice a lot, including money, if his thesis is to be concluded in record time. This step is an inspiration to both the young and the old, especially those seeking to contribute to knowledge. Obtaining a doctorate degree comes with hard work, patience and perseverance. Chief Obasanjo is certainly bound to be confronted by associated challenges and he seems to know this. According to him, “if you want to learn, you must subject yourself to a form of discipline: taking exams, making sure that you go through the rigour of learning and so on.”Perhaps his resolve and strategies will determine how the challenges will be attenuated.

PhD work requires that the candidate devote the requisite time and resources too. Perhaps, Baba has come up with his work plan to accommodate his persona. Unlike most PhD students who battle with finances, Baba may have an advantage here. The academic journey is no easy one and requires huge financial resources. Chief Obasanjo, according to media reports, has begun his fieldwork already by visiting Borno State. I am sure that his final thesis will be on the spotlight especially considering his research interest and perhaps his rather uncommon candidature. However, as it is with most academic outputs resting in the university shelves, one would expect that Obasanjo’s final work will not be meant for the NOUN shelves only. He, alongside his assessors, should ensure that his contributions to knowledge are translated into practice.

A case for students on Open Distance Learning mode

The menace of pursuing a dream in Nigeria Tertiary Institutions

The Generals and their books