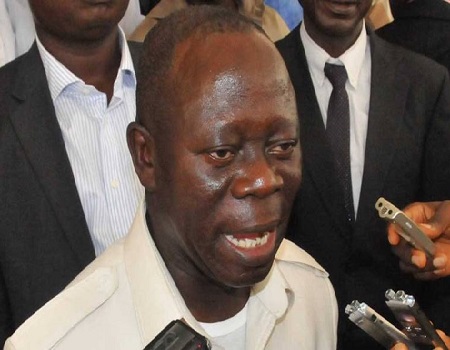 National chairman of the All Progressives Congress (APC), Comrade Adams Oshiomhole, has denied involvement in the protest and attacks on the residence of the Supreme Court Judge, Justice Mary Odili in Abuja.

The Rivers State Commissioner for Information and Communication, Mr. Paulinus Nsirim, in a statement, had alleged that the APC chairman and the Minister of State for Petroleum, Chief Timipre Sylva, were the masterminds of the attack.

Tribune Online checks revealed that Mary Odili was the head of the five-man panel of the apex court in the judgment delivered by Justice Ejembi Ekwo which declared that Biobarakuma Degi-Eremienyo who was running mate to the APC candidate in last November governorship election, David Lyon presented forged certificates to INEC.

The apex court last Friday subsequently voided the mandate of the APC. But Oshiomhole in a statement signed by his media aide, Simon Ebegbulem described the allegation raised by the rivers state government as malicious.

While exonerating himself, the APC chairman said the allegation cast aspersions on his reputation.

Oshiomhole who noted that his party has since made recourse to the apex court to demand a review of its judgment on Bayelsa further argued that the party believes in the civilized way of approaching the judiciary to state its grievances and would not in any way resort to self-help.

The statement read in part: “According to the malicious statement signed by the Rivers State Commissioner for Information and Communication, Mr. Paulinus Nsirim, the “attacks” were made because Justice Mary Odili was a member of the Supreme Court panel that gave a unanimous verdict against the APC-governor-elect in Bayelsa State, David Lyon.

“This reckless defamation of the character of Oshiomhole is unbecoming of a state government that is supposed to operate under the rule of law including fairness and justice to all.

“The statement is an egregious assault on the reputation that has taken Oshiomhole a lifetime to build.

“For clarity, Oshiomhole was not in any way involved in the action that took place at the residence of Dr. Odili, a gentleman for whom Oshiomhole has tremendous respect as a friend of many years despite political differences.

“As a matter of principle, Oshiomhole condemns any harassment, Hon. Justice Mary Odili had suffered for a judgment she gave within her powers aa a judicial officer. Oshiomhole as a one-time beneficiary of judicial redress of injustice always holds the judiciary in the highest esteem and the obedience of court orders.

“Dissatisfied as a party, the APC under Oshiomhole’s leadership has returned to the Supreme Court seeking the review of the judgment. That is the democratic culture to which Oshiomhole subscribes.

“It would be expected that it is the police that should give an account of what happened at the residence of Dr. Odili based on investigation and not the Rivers State government in Port Harcourt.

“The unsubstantiated allegation by the Rivers State government is, therefore, an insult on the APC National Chairman. It is an indecent thing for a state government to do in the circumstance.

“We hereby call on the Rivers State Government to toe the path of decency and withdraw the defamatory statement with due apologies” it stated.