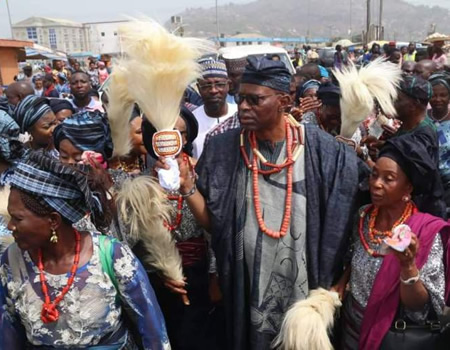 Vice-President Yemi Osinbajo, on Friday, admonished Christians to live a holy life, which clearly showed perfect example of holiness and worthy of emulation by other people.

Speaking at the interdenominational funeral service for the mother of the former governor of Ondo state, Madam Muinat Mosekonla Mimiko, Osinbajo, advised people to live a selfless and dedicated life, saying it is what you live for that you will be remembered for.

“God also revealed to her that she must share the secret of the gospel of Jesus Christ to so many others that is why we are privileged to celebrate with her and to also join her in propagating the gospel.

“The lord meet mama before she died and she wasn’t a young woman when she meets the Lord Jesus Christ, it shows that whenever God has plan and purpose for human beings the plans and purpose will always be fulfilled,” he stressed.

Osinbajo said that Christianity, the gospel of Jesus Christ is not a religion but a plan of God for salvation that is the secret of the gospel, saying everybody is invited to look unto Jesus.

In his sermon, Pastor Jare Adedibu of the Redeem Christian Church of God, (RCCG) advised politician to desist from being materialistic, but use their wealth to assist the less privileged.

He urged politician to always live to their promise by ensuring that people who voted them to power enjoy the dividends of democracy.

Also speaking, the Governor of Ondo State, Arakunrin Oluwarotimi Akeredolu said the deceased has left behind a great and united family, saying the late woman lived a fulfilled life.

According to him, the most important thing is that mama accepted Christ before she died, saying somebody can rest in peace when the person accepts Christ as Lord and saviour.

Speaking earlier, the former vice-chancellor of Adekunle Ajasin Akungba, Prof. Femi Mimiko has described his late mother has a wonderful woman to the children who have done good things possible to support her late husband by given the children best education.

Prof Mimiko, therefore, thanked God for the life his mother has spent and they are proud of her accomplishment while praying that God will sustain the children to continue in her part.