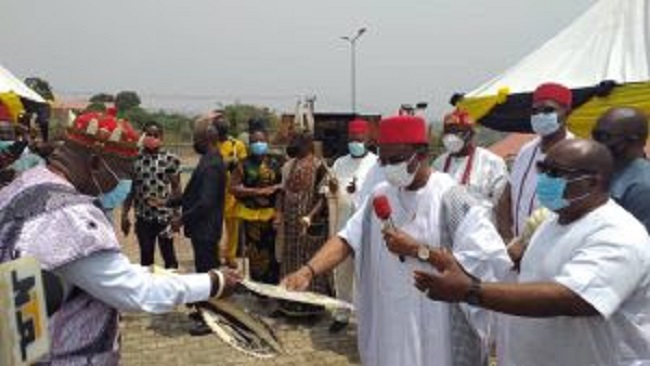 Traditional Rulers of Ideani, Ugbene and Orsumoghu of Anambra State have received certificates of recognition from the state government.

Governor Willie Obiano performed the function at the governor’s lodge,  Amawbia, on Friday.

It was gathered that the recognition, makes it the fifty-third certificate presented by Governor Obiano’s administration since inception.

Presenting the certificates, Governor Obiano, charged them to use the opportunity to unify their communities which he said will entrench peace in their community and Anambra in general.

He called on them to co-opt their community Youths into their cabinets as a way of involving them to help address the challenge of cultism.

Commissioner for local government and chieftaincy matters, Chief Greg Obi, said that Governor Obiano simplified the process of giving certificates to traditional rulers-elect by following the tradition of the communities.

He disclosed that the traditional ruler of Osumoghu died in 1985 and that the community members came together to have a consensus candidate.

Chief Obi pointed out that Ideani and Ugbene communities have a system in place whereby they kingmakers who will go through the process at the end of which they were given the certificate.

He called on the new traditional rulers to know that there is a code of conduct guiding the traditional institution in Anambra State.

Chairman of the South East and Anambra State Traditional Rulers’ Council, Igwe Alfred Achebe reminded them that they were selected by the community, urging them to lead with truth and love which engender progress.

Igwe Achebe announced that in Anambra, they meet as traditional rulers periodically at the state, senatorial and local government levels and asked them to attend those meetings for the good of their communities.

A stakeholder in Osumoghu who is also the Director-General of Anambra Road Maintenance Agency, Chief Emeka Okoye pledged with communities involved to support their traditional ruler to rule well.