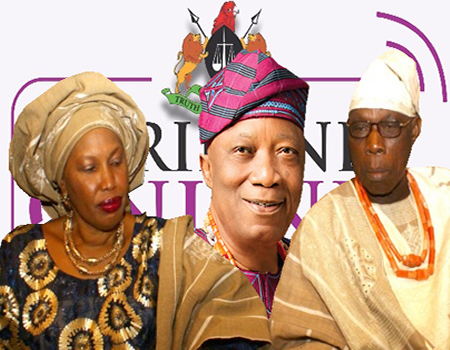 One of the wives of former President, Chief Olusegun Obasanjo, Taiwo Obasanjo on Monday filed a suit at an Ikeja High Court seeking a court order to stop the wedding of their son Olujonwo Obasanjo.

Obasanjo and father of the bride, Sir Kessington Adebutu, aka ‘Baba Ijebu’ the lottery business mogul are the respondents to the suit.

Mrs Obasanjo who is the twin sister of Chief Kenny Martins the former  coordinator of the Police Equipment Fund is seeking for a postponement of the wedding of her son Olujonwo Obasanjo to Tope Adebutu which is slated for May 11 and 12.

She wants a wedding date to be fixed after June 1.

Mrs Obasanjo seeks a court declaration that as the mother of the groom, she has parental rights to take part in the deliberations, decisions and activities leading to the forthcoming ceremony.

According to her, wedding invitations have been issued and she has been excluded from the preparations for the upcoming nuptials.

She stated in court documents that  prior to the fixing of wedding dates, she had a premonition regarding her son who turns 34 on June 1.

According to her, she also received prophesies and spiritual warnings to the effect that Olujonwo should not undergo any elaborate celebration before his birthday which is two weeks after the wedding to avoid any impending calamity.

Mrs Obasanjo stated  in court documents that she commenced the suit to compel Adebutu and Obasanjo to shift the wedding to a date beyond June 1.

Mrs Obasanjo said her pleas fell on deaf ears and she was instead, insulted by  members of the family.

The suit  with number ID/262FPM/2017 is to be heard before Justice Lateefa Okunnu with April 10 fixed for hearing of the suit.