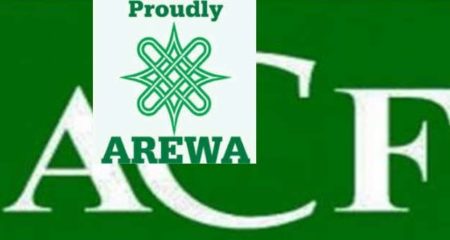 MOUTHPIECE of North, the Arewa Consultative Forum (ACF) has cautioned Yoruba elders to restrain from giving ethnic coloration to the unfortunate crisis that erupted in Ile-ife, Osun State recently.

ACF in a statement issued to newsmen in Kaduna on Monday and signed by the National Publicity Secretary, Alhaji Muhammad Ibrahim said the elders should say something that would unite us not divide us.

According to the statement, the clash between some Yoruba and Hausa traders was criminally inclined which does not know ethnicity or religion.

The statement noted with dismay, accusations by some Yoruba leaders that the Police report on the clash was biased, as the suspects paraded by the police were alleged to be mainly Yoruba.

It therefore cautioned that, disagreement between individuals or groups of persons that are regarded as ethnic or religious tend to deepen hatred and division among Nigerians, therefore, elders known for their wisdom in settling disputes should not fan embers of divisions among their followers.

According to the statement, “after the unfortunate clash that happened two weeks ago at Ile-Ife, Osun State between some Yoruba and Hausa traders, Arewa Consultative Forum (ACF) in our reaction condemned the killings and called on all and sundry involved to eschew bitterness and imbibe the spirit of accommodation and tolerance.

“ACF commended the prompt action taken by the Security Agencies, the Osun State Government and Community leaders to restore peace and normalcy in Ile-Ife.

“ACF also called on the various communities that have lived together in peace and harmony over the years to always exercise restraints in their utterances on such sensitive issues that might snowball into crises with reprisal consequences. Our position was widely published in both print and electronic media.

“Unfortunately, subsequent events after the preliminary investigation report of the Police into the Ile-Ife crisis, there have been accusations by some Yoruba leaders that the Police report was biased, as the suspects paraded by the police were alleged to be mainly Yoruba.

“ACF’s position in this regard is to appeal to the respected Elders of Yoruba not to give unnecessary ethnic coloration to the unfortunate Ile-Ife clash as criminality knows no ethnicity or religion.

“Any slightest disagreements between individuals or groups of persons that are regarded as ethnic or religious tend to deepen hatred and division among Nigerians. Elders are known for their wisdom in settling disputes and not to fan embers of divisions among their followers.

“ACF therefore, once more calls for restraints among the various community leaders and urge them to document their grievances and channel same through our known legal process of addressing such grievances, rather than making provocative and inciting statement capable of creating disunity”, the statement read.