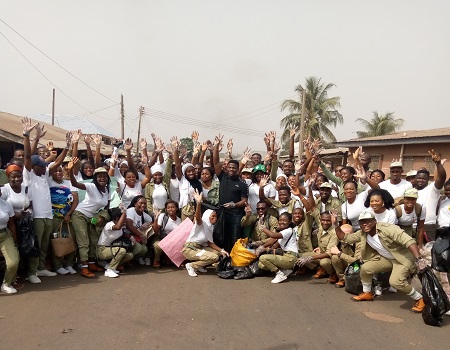 Share
The National Youth Service Corps (NYSC) corps member in Oyo, the ancient town of Oyo State, have sensitized the people of the community on waste disposal in their various environments.
The corps members carried out the sensitization program in collaboration with the Ministry of Youth and Sport in the state.
The program, which kicked off at the Owode area of the town, had in attendance the Commissioner of Youth and Sport in Oyo State, Engr Seun Fakorede.
Speaking at the event, the commissioner thanked the corps members for the good initiative, saying the program was for the development of the community and the state at large. 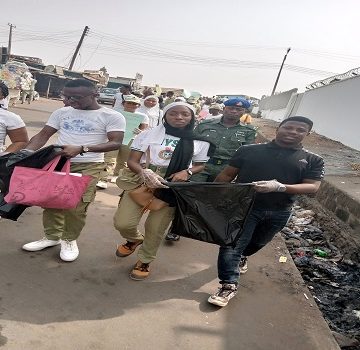 The commissioner, who reminisced on his life journey being a commissioner at the age of 27, advised the corps member to endeavour to work hard during their phases as it would come with a lot of benefits to both individuals and the entire community.
He said: I am happy to be here. Anything that involves the youth, is what have decided to give my time and effort.
“In whatever we need to do at the moment and whatever we can continually do to better the community we are serving, let us give in our best.”
He, therefore, emphasized the need for all to work for the maintenance of cleanliness as it remains a vital instrument for healthy living in the community.

After his speech delivery, Engr Fakorede together with the corps members proceeded to the popular Danzaria market in Owode area of the town.
At the market, the commissioner picked waste round the market, sensitizing traders and buyers on waste disposal in their various surroundings.
While speaking at the event, the representative of Eleven Eleven Twelve Foundation (EETF), Oluwayemisi Adeegbe, said a sustainable environment could only be achieved when there is a positive change in people’s attitude, noting that the quality of the environment remains paramount to achieving sustainable development goals.
She, therefore, thanked the people of the town and the corps members for their participation in the recycling program.
On his part, Victor Akinmuyiwa, a representative of Recycledge, an environmental protection organization, enlightened the people of the ancient town on the importance of recycling in the environment.
He, however, highlighted the importance of recycling to the economy, which he said triggers continuous sustainability of the environment through waste management.
The organization, in its support, presented gifts to the inhabitants of the community who engaged in recycling and also to corps members who participated in the waste disposal.