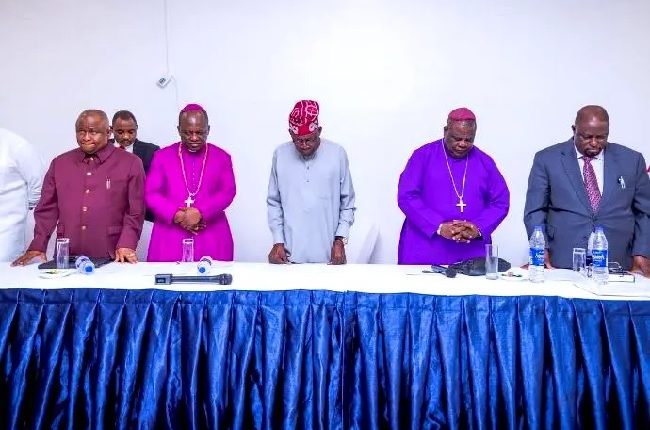 Bishop Katung said the Pentecostal Bishops from Northern Nigeria should be commended for bringing the plight of Northern Christians to the attention of the APC presidential candidate on his choice of Muslim running mate, rather than being condemned by the likes of former Secretary to the Federal Government of the Federation, Babachir Lawal, and his group.

The Bishop, in a statement in Jos, Plateau State, posited that the recent comments made by Baba Chir Lawal, over their meeting with Tinubu, were done out of mischief.

According to him, Lawal’s description of the respected church leaders as fake bishops was simply because the bishops gave Tinubu a chance to be heard.

He narrated that Lawal’s actions depicted how low he could go for his selfish ambition, even if it meant smearing God’s anointed servants adding that BabaChir Lawal, who does not belong to the Pentecostal fold, is in no way qualified to access who a Bishop is or question their callings.

Bishop Katung said Lawal may have the right to disagree with the steps taken by the northern Pentecostal bishops but has no right to impugn their integrity or use uncouth language against them.

Bishop Katung advised the former Secretary to the Federal Government of the Federation to toe the line of caution as he pursues his agenda and not to use the church to fight his personal battles.

“As church leaders and concerned citizens, we, as a group of Pentecostal Bishops from Northern Nigeria, the region which is most aggrieved by the same faith ticket decision of the APC, decided to engage with Bola Ahmed Tinubu, the person who is at the center of the controversy, to express the concerns and fears of the Christian community not only in Northern Nigeria but the country as a whole and to give him an opportunity to explain his decision.

“As Arc Bishop John Praise aptly captures it at the interface, “This is in line with the biblical principle as contained in John 7:51 that no one should be condemned without first giving him a hearing, a principle that is also encapsulated in the constitution of our country,” he said

He also stated that during the meeting with Tinubu, notable and respected church leaders such as Arc Bishop John Praise, the national vice president of the Pentecostal Fellowship of Nigeria (PFN), and Rev Danjuma Byang all spoke to highlight the marginalization and injustice meted out to Christians in the north over the years, which has created mistrust among northern Christians about the APC’s Muslim-Muslim ticket.

He challenged Babachir Lawal to tell the people of the North the impact he made on the church while he was in office because that qualified him to become a champion of the Christian faith in northern Nigeria and Nigeria as a whole.

Bishop Katung warned that Lawal should not be allowed to use the church to fight his personal battles, as he was never there for the church and cannot now speak for the church.

Tinubu arrives CAN headquarters for interaction

APC mega rally is a path to victory ― Minister