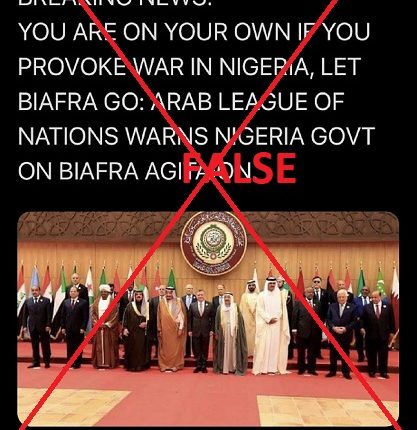 VERDICT: No evidence to ascertain the origin of the statement. The statement is not new as it has been in circulation since 2017.  Also, Nigeria is not part of the Arab League and there is no evidence that that league will make a statement about a non-member.

FULL STORY: A Twitter user, Amah Johnbosco(@johnbosco_amah), on Monday, June 28, 2021 claimed that the Arab League of Nations said the Nigerian government is on its own if it provokes war while warning the government to let Biafra go.

His tweet was accompanied by a photograph and a caption saying, “BREAKING NEWS: YOU ARE ON YOUR OWN IF YOU PROVOKE WAR IN NIGERIA, LET BIAFRA GO: ARAB LEAGUE OF NATIONS WARNS NIGERIA GOVT ON BIAFRA AGITAION.”

Within a few hours, this tweet has attracted over 142 retweets, more than 120 likes and over 30 comments. Dubawa conducted multiple searches that show that this claim has been posted by multiple Facebook and Twitter users.

The search led to a Facebook post by Biafra TV, the same claim with more details attached to it. The post had 149 reactions, 42 comments and 242 shares as at Monday evening. According to this post, the claim was made by a senior civil servant in the presidency who granted an interview to Family Writers Chief Media Analyst, Mazi Onyebuchi Eze, but pleaded anonymity.

“According to a senior civil servant in the presidency who granted interview to Family Writers Chief Media Analyst, Mazi Onyebuchi Eze, but pleaded anonymity made it clear during the interview that the Arab countries have warned Nigeria government to allow Biafra to secede from Nigeria in peace through the instrumentality of referendum as currently demanded by Biafrans.” 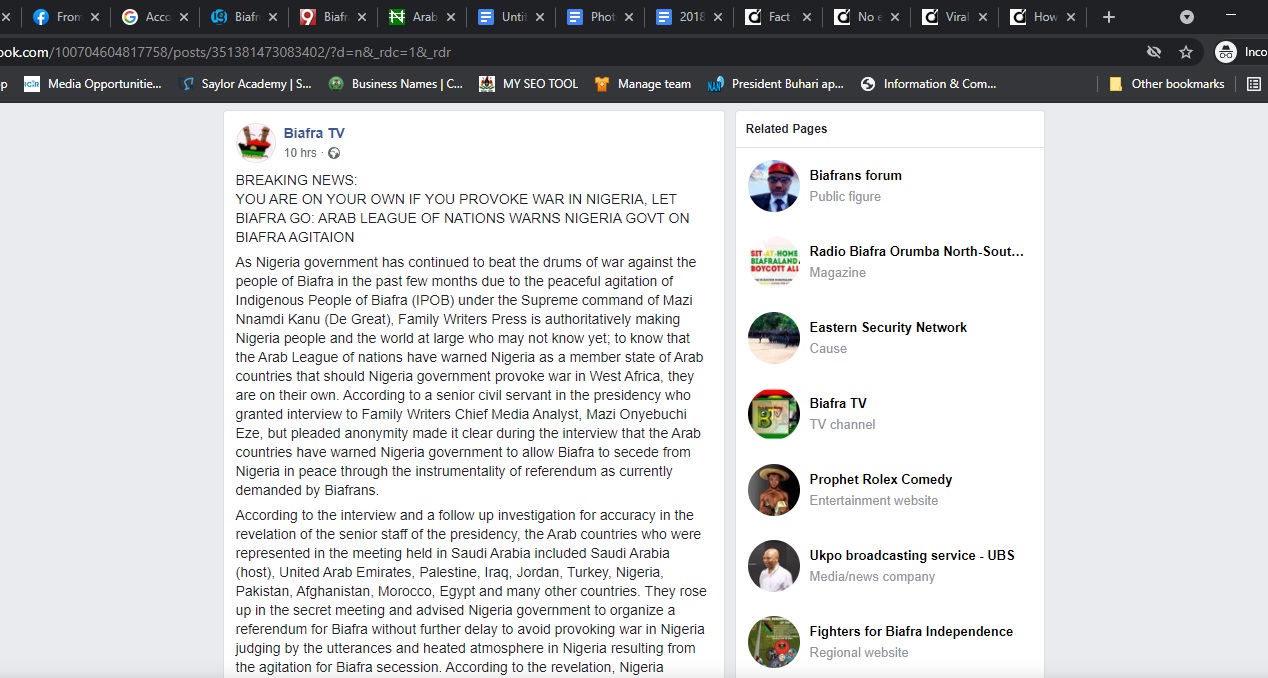 A keyword search showed that the claim with the detailed statement was first circulated in 2017 by several Twitter and Facebook users.

Further checks by Dubawa revealed that the claim was published on some blogs.

A news platform, 9 News Nigeria, on June 27, 2020, published the claim and details shared by Biafra TV.  The post was tagged with the headline: “Biafra: Heavy Tension As Arab League writes Buhari Over Rising Tension in Nigeria.”

Another platform, IgbereTVnews, published the same narrative as the one on 9 News Nigeria, with the headline: “Biafrexit: Arab League writes Buhari Over Rising Tension in Nigeria.”

The post also appeared on Nairaland with the same narrative and a different headline: “Arab League Sternly Warns Nigeria To Give Referendum To Biafra.”

Dubawa conducted a search on the Family Writers Chief Media Analyst, Mazi Onyebuchi Eze,who conducted the interview where the claim was made and nothing was found about him except press statements purportedly signed by him. 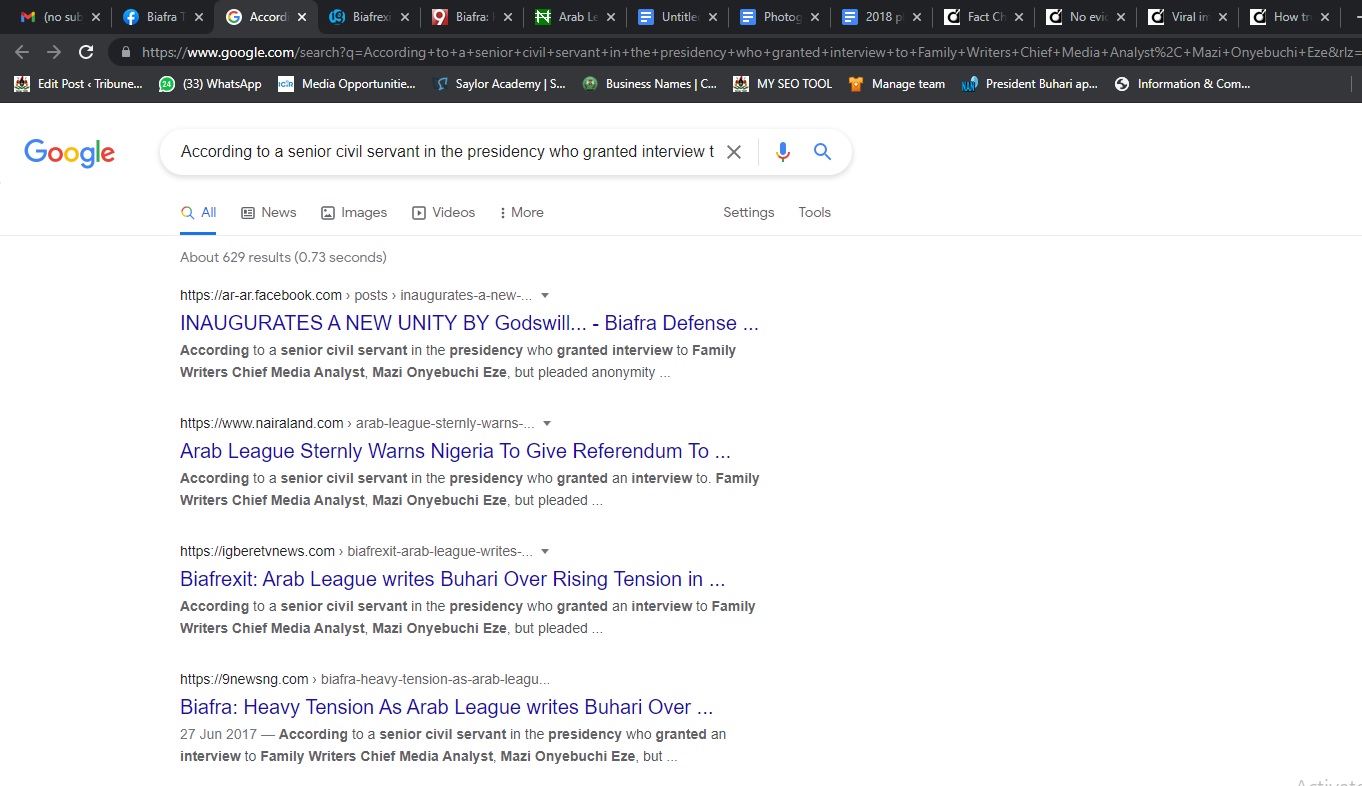 A screenshot showing claim was published by some blogs

Dubawa went ahead to research the Arab League of Nations and its goal. The league is a regional organisation in the Arab world, which is located in Northern Africa, Western Africa, Eastern Africa, and Western Asia. The Arab League was formed in Cairo on March 22, 1945, initially with six members: Egypt, Iraq, Jordan, Lebanon, Saudi Arabia, and Syria.

The league currently has 22 members but Syria’s participation has been suspended since November 2011.

The League’s main goal is to “draw closer the relations between member states and co-ordinate collaboration between them, to safeguard their independence and sovereignty, and to consider in a general way the affairs and interests of the Arab countries.”

Independent monitors will enhance success of N-SIP in communities ― Minister