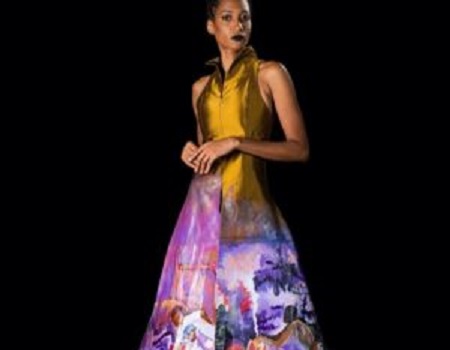 News Agency of Nigeria (NAN) reports that the dress called ‘Esther’ is the first piece of haute couture ever to join the National Museum of African Art’s permanent collection when it was donated by Torlowei.

The National Museum of African Art is the Smithsonian Institution‘s African art museum and the first institution dedication to African Art in the United States.

Its collections include 9,000 works of traditional and contemporary African art from both Sub-Saharan and Arab North Africa, 300,000 photographs, and 50,000 library volumes.

Tolorwei gave the history of the dress through her official Instagram page @torloweiofficial.

She wrote, “5 years ago the @smithsonian institute’s @nmafa invited our creative director @patience_torlowei to create 8 special pieces to commemorate the museum’s 50th anniversary.

“The celebrations along the theme of “Earth Matters”. The final piece in this special series was the #EstherDress, a one-of-a-kind raw silk dress painted on by hand.”

NAN reports that the dress will be on display to the public for the first time since she joined the Museum’s collection on June 20.

The display will be part of the #IAMExhibit, a celebration of female contemporary artists from Africa, the Museum’s first all-female exhibition.

The dress, which tells the story of the way Africans have treated the continent despite its abundant wealth, will be available for viewing by the general public until July 2020.

Fashion is the new global centre of attractions, says Shaeeb