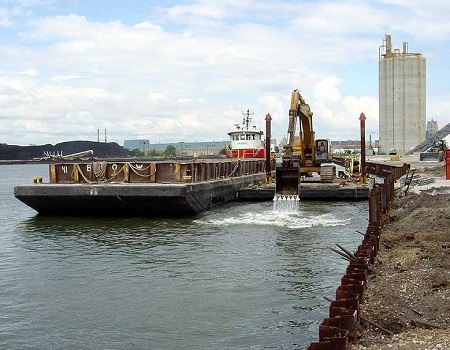 A coalition of nine civil society organisations has appealed to the National Assembly to revisit its earlier probe on the $195 million coastal waterways security contract awarded to an Israeli private firm, HLSI Security Systems and Technologies Limited, by the Nigerian Maritime Administration and Safety Agency, NIMASA.

Operating under an umbrella body,  Empowerment for Unemployed Youth Initiative they expressed grave concern on the security implication of ceding Nigeria waterways to a firm owned by expatriates.

Addressing newsmen, national coordinator of the coalition, Solomon Adodo submitted that the award of the contract to a foreign security firm ran contrary to some sections of the nation’s constitution which provides that its security shall be in the hands of its Armed Forces.

He said “All over the world, no nation leaves affairs of national security totally in the command and control of a private firm. Nigeria should therefore not be an exception.”
“The law thus vested solely the task of protecting our waterways on the Nigerian Navy.

“The Navy was given expanded military roles, especially in the oil and gas sectors of the Nigerian maritime economy.”

They claimed that besides the gross violation of the Constitution, the contracts valued at about One hundred and ninety-five million dollars ($195,000,000.00) which were awarded to HLSI security systems equally empowers foreign nationals at the expense of their Nigerian counterparts.

He said: “Our cry was premised on the fact that the said contract have grave national security implication owing to the ceding of the control of our waterways to a foreign firm which is a gross violation of our status as a sovereign Nation.

“This clandestine contract contravenes the provisions of the 1999 Constitution of the Federal Republic of Nigeria as amended, Chapter 1V, Part III, Section 217, subsection 1&2 states, ‘’There shall be an Armed Forces for the Federation as may be established by an Act of the National Assembly.

“It also negates the provision of Part 1, section 4 and particularly subsection A of the Armed Forces Act which provides thus: ’the Navy shall, in particular, be further charged with-  enforcing and assisting in coordinating the enforcement of all customs, laws, including anti-bunkering fishery and immigration laws of Nigeria at sea;enforcing and assisting in coordinating the enforcement of national and international maritime laws ascribed or acceded to by Nigeria;making of charts and coordinating of all national hydrographic surveys; and promoting, coordinating and enforcing safety regulations in the territorial water and the Exclusive Economic Zone of Nigeria’’.

He explained that: “This law thus vested solely the task of protecting our waterways on the Nigerian Navy. The Navy was given expanded military roles, especially in the oil and gas sectors of the Nigerian maritime economy.”

The coalition said it had since petitioned the National Assembly, explaining that in the petition, it specifically emphasised that: “That no Sovereign Nation surrenders or cedes control of its waterways to foreign entities for the inherent dangers therein.”

Other points, according to Mr Adodo were: “That the contract and ceding of our waterways to the exclusive control of a foreign firm is an avenue to divert Nigeria’s oil for selfish interest and personal gains” and “That ceding our waterways and the critical national assets therein to foreign firms will definitely undermine the constitutional role of the Nigerian Armed Forces as prescribed by law and will expose our Nation to glaring security risks and ridicule among the comity of nations.”

The groups frowned at the continuation of the contract after the Federal Executive Council had ordered its cancellation.
“The cancellation of the said contract was as a result of the obvious flaws and intentions to defraud the nation which caught the eagle-eyed attention of President Muhammadu Buhari and prompted him to act fast in the overall national interest.

“To our consternation and dismay, however, our findings indicate that enemies of our commonwealth who seek to cast aspersions on the good government of President Buhari just to achieve their selfish ends smuggled the said Contract into the 2018 and 2019 National Budget to finance the contract which had already been reversed by the President.

“The desperation to go ahead with this contract despite its grave implications of economic sabotage and national security compromise raises very strong questions.

” Let it not be lost on us that this contract was entered into between the Federal Ministry of Transportation and HLSI whereas the Contract is a security contract for which the Ministry of Defence should have appropriately handled. Furthermore, the Firm awarded the contract has no sound antecedents of handling contracts of this magnitude, we must, therefore, make all efforts to avoid the pitfalls and challenges Nigeria encountered with the P&ID Contract.”