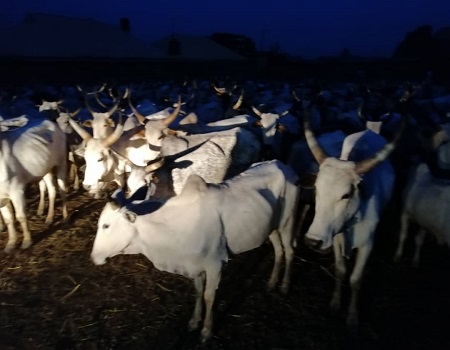 The Deputy Commissioner (DCP) Department of Finance and Administration, Kaduna Command, Onah Sunny made the disclosure at a press conference on Wednesday in Kaduna.

“It is very important to let you know that, we are here today to showcase the remarkable achievements the Kaduna state Police Command recorded yesterday (Tuesday) by recovering 246 Cows and 27 sheep.

“The animals were suspected to have been rustled, and the arrest of seven suspects in connection to the crime,” he said.

According to him, the feat was achieved through community willingness to ensure the safety and security of lives and property of well-meaning citizens of the state.

Sunny said the Kaduna Command received reliable information that there were suspected rustlers trying to move rustled cattle in large numbers to a location yet to be ascertained.

“On receipt of the information, the Command immediately swung into action and intercepted the cattle and sheep around Iche Village near Kasuwan Magani in Kajuru Local Government Area of the state.

“The operatives equally arrested the seven suspects, who are currently assisting Police in their investigation.

“Let me call on the Public in the State to rededicate themselves to the concept of civic responsibility to demonstrate personal and collective commitment in assisting the Police with timely and reliable information to be able to sustain the gain recorded and improve security in our communities in general.

“I want to assure you that the suspects will be prosecuted accordingly upon completion of an investigation and the cattle will be handed over to the real owners with verifiable proof of ownership,” Sunny said.