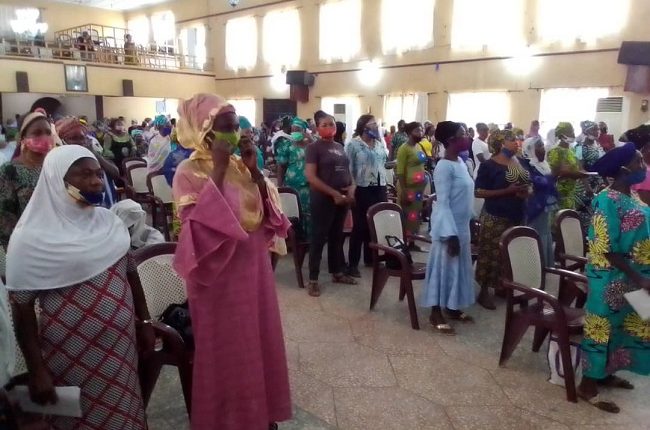 The National Directorate of Employment (NDE) has disbursed 5 million Naira to 500 women in Oyo State as loans to boost their businesses.

The loan disbursement was facilitated in collaboration with the wife of the former governor of Oyo State, Mrs Florence Ajimobi,  to the beneficiaries.

According to an aide to the former governor’s wife, Mrs Yemisi Owonikoko, 20 women were drawn from the 11 local government areas that make up Ibadan to benefit from the loan. The programme was held at the Rev. Father Dolan Hall, St. Joseph Catholic Church, Oke-Ado Ibadan, on September 3, 2020.

The disbursement of the loan was done by NDE, Oyo State coordinator, Mrs Olayemi Olayinka assisted by representatives of Mrs Ajimobi, and NDE Zonal Director (South West). Coordinator of NDE, Mrs Olayinka Olayemi, in line with the COVID-19 guidelines.

Mrs Florence Ajimobi admonished the women to judiciously use the loan to benefit their businesses in her message delivered by Mrs Omolara Farinloye.

In her welcome address, Mrs Olayinka said that the programme was under NDE’s Micro Enterprises Enhancement Scheme (MEES).

Olayemi said the programme was part of the “Federal Government’s laudable empowerment programmes across the country being implemented by the National Directorate of Employment under the leadership of Dr Nasiru Mohammed Ladan Argungu.”

“Today, the Federal Government, through the NDE is taking another bold step by empowering 500 beneficiaries in Oyo State. Each of them will get the sum of N10,000 from taxpayer money as financial backing to start up a micro-business of their choice or expand on the existing one.”

She noted that the empowerment programme was designed to help the women start and expand their own businesses.

“It is also crucial to stress that this disbursement scheme is necessary to cushion the effect of COVID-19 pandemic on the country’s economy especially now that global economies are battling to remain afloat.”

NDE zonal director, (South West), who was represented by Mrs Stella Odunwa,  encouraged the beneficiaries not to see the money as little because “from little things great things often begin.”

Tribune Online spoke to some of the beneficiaries who appreciated the Federal Government for the loans granted them.

At the start of the programme, a minute silence was observed in honour of the late former governor of Oyo State, Senator Abiola Ajimobi.