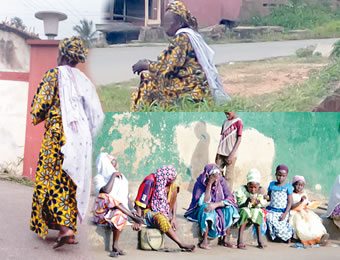 Nasarawa State government has banned the activities of street begging across the state.

The Emir of Keffi, HRH. Alhaji Shehu Chindo Yamusa disclosed this on Thursday during an expanded security meeting with security operatives, traditional rulers, and government officials, organised by the Governor Abdullahi Sule, at Government House, Lafia.

The Emir said, “street bagging is separated from the Almajiri system of education, the state and Jamaatu Nasir Islam (JNI) go against street begging.

“Almajiri system is a system that exited over 300 years ago, and was used by most Islamic scholars for education.”

He added that the state and JNI will set up a committee that would take inventories of teachers, schools and inspect and identify them.

While briefing journalists after the meeting, the state Commissioner of Police, Bola Longe, stated that the security agencies now resolved to collaborate with the traditional rulers to end criminal activities in the state, assuring people of the state that armed bandits activities are curtailed.

“We have constructed a strategy on how to work together with a traditional ruler on how to mobilise their subjects to feed us with useful information for effective policing.

“Criminal elements would not be able to operate anymore, because we have a comprehensive program that would checkmate their antics.
Kidnapping, bandits, and arm robbery have been drastically curtailed,” he stated.

He stressed further Nasarawa is surrounded by five states where an influx of people causing a security threat to the state, saying ” we have made up our mind to tackle all the exit routes to Nasarawa state to track out criminal elements.”

On his path, the Emir of Lafia, Justice Sidi Bage, said not given traditional rulers their right place might have created the vacuum that allows this criminality to find a ground to operate.

He assured the government and people of the state that such activities have come to a terminal point.