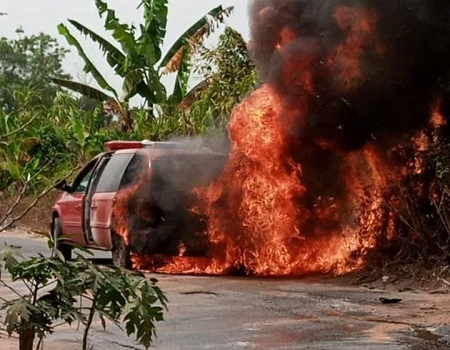 The corpse of the mother of Rev. Father Alex Onyemata of the Catholic Diocese of Okigwe was saved by family members from being burnt when a mystery fire gutted the ambulance conveying her remains to a mortuary in Imo State, on Sunday

However, the incident, which happened a few poles to the Mercy Mortuary, Umulogho Obowo, Imo State, saw the ambulance, a Toyota Sienna, completely burnt.

According to eyewitnesses, the ambulance left the deceased compound from Dikenta Avutu Obowo with the remains around 2:00 p.m. and was gutted by fire while in motion along Owerri-Umuahia Expressway.

However, the remains were rescued by the deceased family members, who had accompanied it to the mortuary before the fire totally engulfed the vehicle.

One of the eyewitnesses said: “The ambulance was on motion when the fire started dropping from the fuel tank. On noticing it, the driver immediately stopped and a crowd of people came out to assist him to stop the fire with fire extinguishers, buckets of water mixed with detergent, buckets of sand and green leaves, all to no avail”

It was further gathered that as they made efforts to quench the fire, the fuel was still dropping more from the fuel tank, indicating that the fire was already burning inside the fuel tank.

“As the dropping flames became more regular, the bereaved family forced open the ambulance boot and brought down the corpse in a stretcher before the vehicle exploded into real flames and burnt to ashes”, Prince said.

The bereaved, as gathered, was forced to carry the corpse in the stretcher and walked to the mortuary to deposit the corpse.